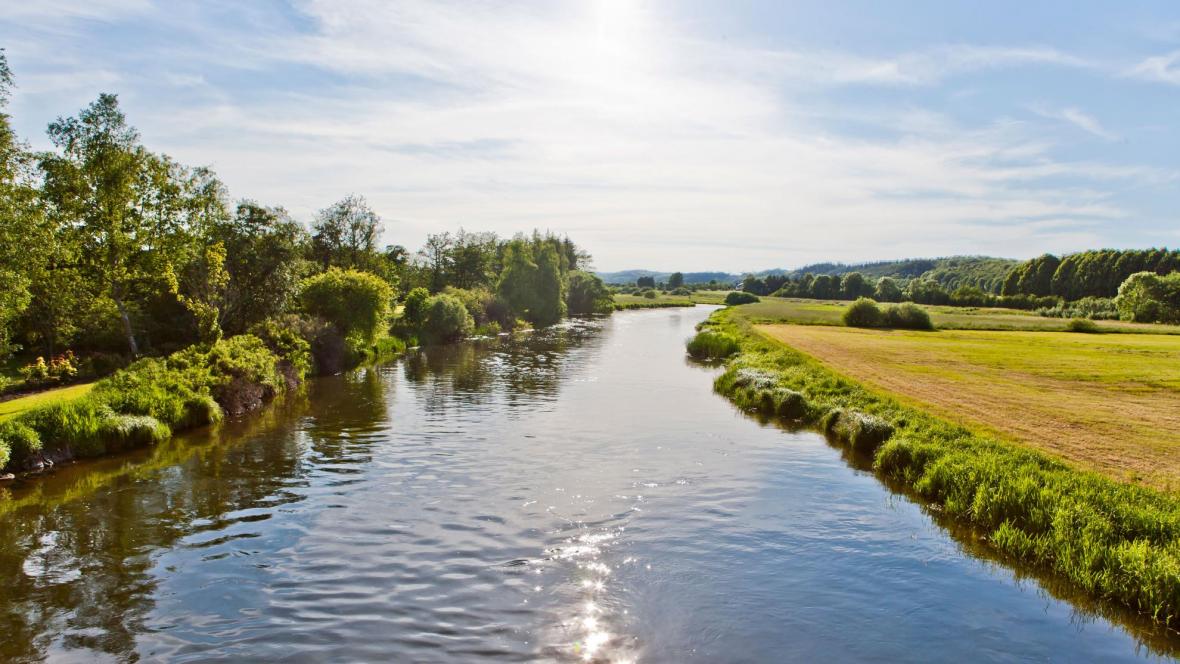 At over 98 miles (158 km) long the Gudenaen is Denmark’s longest river, from its source at Tinnet Krat northwest of Tørring, in east-central Jutland, to the Randers Fjord (a long inlet of the Kattegat sea) on the east coast. On its way, the river traverses the relatively high lying region of Søhøjlandet; passes pockets of pristine woodland and is fed by numerous streams and wetlands that spill over into crystal clear lakes before it empties in Randers Fjord.

1. Take a city tour of Randers

At the mouth of the river stands the historic town of Randers, with its narrow medieval streets, picturesque squares and cosy half-timbered buildings. A great way to get acquainted with the town is by walking ‘The Star Route’ – a 2.5 kilometre self-guided tour that starts at the central town square Rådhustorvet . Giving a brief overview of the 18th century Town Hall, Middle Ages merchant’s premises and the former Jewish Quarter, it then follows 15 plaques which offer a fascinating insight into the town, its attractions, historic buildings and landmarks as well as sharing a number of amusing anecdotes.
Staying in Randers also offers its own step back in time at Hotel Randers, one of the oldest hotels outside Copenhagen. Dating back to 1856 it boasts an eclectic mix of star-studded guests including the Danish royal family, Josephine Baker, Victor Borge and Ringo Starr. Elaborately decorated with lavish antiques and many period features including the ‘Gauguin’ banqueting room that was decorated by Jean René Gauguin (Paul Gauguin’s son) in 1956, five years before he died. The impressive floor to ceiling murals in yellow and light blues hues are typical Scandinavian colours of this period and there’s also a collection of his ceramic figures. In contrast the hotel offers excellent modern dining in its contemporary Café Mathisen.

2. Go rocking and rolling in Randers

One of Randers’ more modern and quirky attractions is Graceland Randers, a copy of Elvis Presley’s home in Memphis, Tennessee. It boasts one of the largest collections of Elvis memorabilia in the world, gathered mainly by one local Randers resident, and houses a cinema for watching Elvis documentaries, a ‘Highway 51 Diner’ for slap up Southern fare and is one of the city’s many music venues. Alternatively, Art lovers might also enjoy the Randers Kunstmuseum (Randers Art Museum) which houses an extensive collection of Danish and International art from the 1800s to the present day including works by Hammershøi, Andy Warhol and Yoko Ono.

3. Get out and about on the river

On the outskirts of town the great outdoors beckons with a variety of activities from biking, hiking, canoeing to some of the best salmon fishing in Europe in the surrounding lakes and rivers. Staying at Hotel Fru Larsen, keen anglers can savour their catch (salmon, trout, pike and perch) from the nearby Lilleåen stream by having it transformed into a plate of inspirational Nordic cuisine by award-winning gourmet chef Tommy Friis.  Golf and spa goers are also well catered for at the Lübker Golf Resort with its 27-hole Robert Trent Jones II designed Championship golf course and superb wellness centre.

4. Explore the history and art of Silkeborg

Not far from Randers and set to a backdrop of glistening lakes, Silkeborg offers more breath-taking scenery and fascinating attractions coupled with excellent eateries and galleries.
Well-known as home to the world famous prehistoric Tolland Man – a perfectly preserved Iron age body that was found in a nearby bog, the city’s history along with the mystery surrounding this 4,200 year old man’s death can be fascinatingly explored at the Silkeborg Museum.  Whilst a more abstract overview of the city can also be enjoyed at Museum Jorn. Recounting the life of former resident and internationally renowned artist Jorn Asger who founder of the avant-garde COBRA movement, the museum showcases a diverse collection of painting, sculptures, graphic works and tapestries from the 1950s to 1970s.

To get a sense of the city’s idyllic setting and surrounds, take a leisurely cruise on one of the world’s oldest coal burning paddle steamer Hjejlen or opt to ascent the nearby Himmelbjerget– ‘The Sky Mountain’, one of Denmark’s highest points and climb its 19th century tower for the ultimate panoramic view.

6. Or let the train take the strain

Veteranbanen Bryrup-Vrads, a vintage train ride on the old Silkeborg – Horsens rail track, also offers a magnificent journey through scenic valley with stunning lake vistas to the old outpost of Vrads Station which has been charmingly converted into a café.   Food lovers can also dine out on the view and great gourmet food at the 150 year old Hotel Julsø on the riverbank near Himmelbjerget or head back into Silkeborg to the Radisson Blu Hotel Papirfabrikken, a converted papermill with its prime waterfront restaurant Café Evald.

Heading south for the lakeside market town of Skanderborg, stop in Ry and uncover the ruins of the most thoroughly excavated monastery from the Middle Ages in Denmark at the Øm Kloster Museum.  Stunningly situated between the lakes of Mossø and Gudensø, it also house Denmark’s oldest monastic garden and contains over 60 species of cultivated plants used during the Middle Ages as well as medicinal herbs.

8. Have a taste of local produce

For more locally grown produce, visit the small garden nursery of Det lille gartneri with its homegrown vegetables, fruits and flowers or head to the family run Lyng Dal Hotel and Restaurant.  Surrounded by beautiful gardens and heather covered hills, the restaurant serves up creative Danish cuisine made from its own freshly picked and foraged ingredients.

In Skanderborg, visit The Museum at Adelgade Skanderborg “Slotsbanken”, which was once part of the royal garden of Skanderborg Castle that stretched all the way down to Lake Lillesø and see the remains of the intriguing German air force headquarters from World War II, where two bunkers have been adapted into The Museum of Liberation. Outlining the city’s occupation, resistance, and the liberation, it also includes one of the few top-secret ENIGMA code machines used by the German military forces and famously cracked by the British.

10. Go directly to jail at the Prison Museum

And for something completely different along a similar theme, drive on to the pretty town of Horsens to FÆNGLSET Horsens, The Prison Museum. Formally a prison from 1853 to 2006, it provides a thought-provoking look at prison life over the last 150 years with details of one of Denmark’s most elaborate escapes.
With such a plethora  of things to see and do, just go with the flow and be truly captured by the Gudenåen River for a short or weekend break of star-studded culture, history, stunning countryside and delicious Danish food.

2 thoughts on “Top 10 attractions along the Gudenåen riverbank”