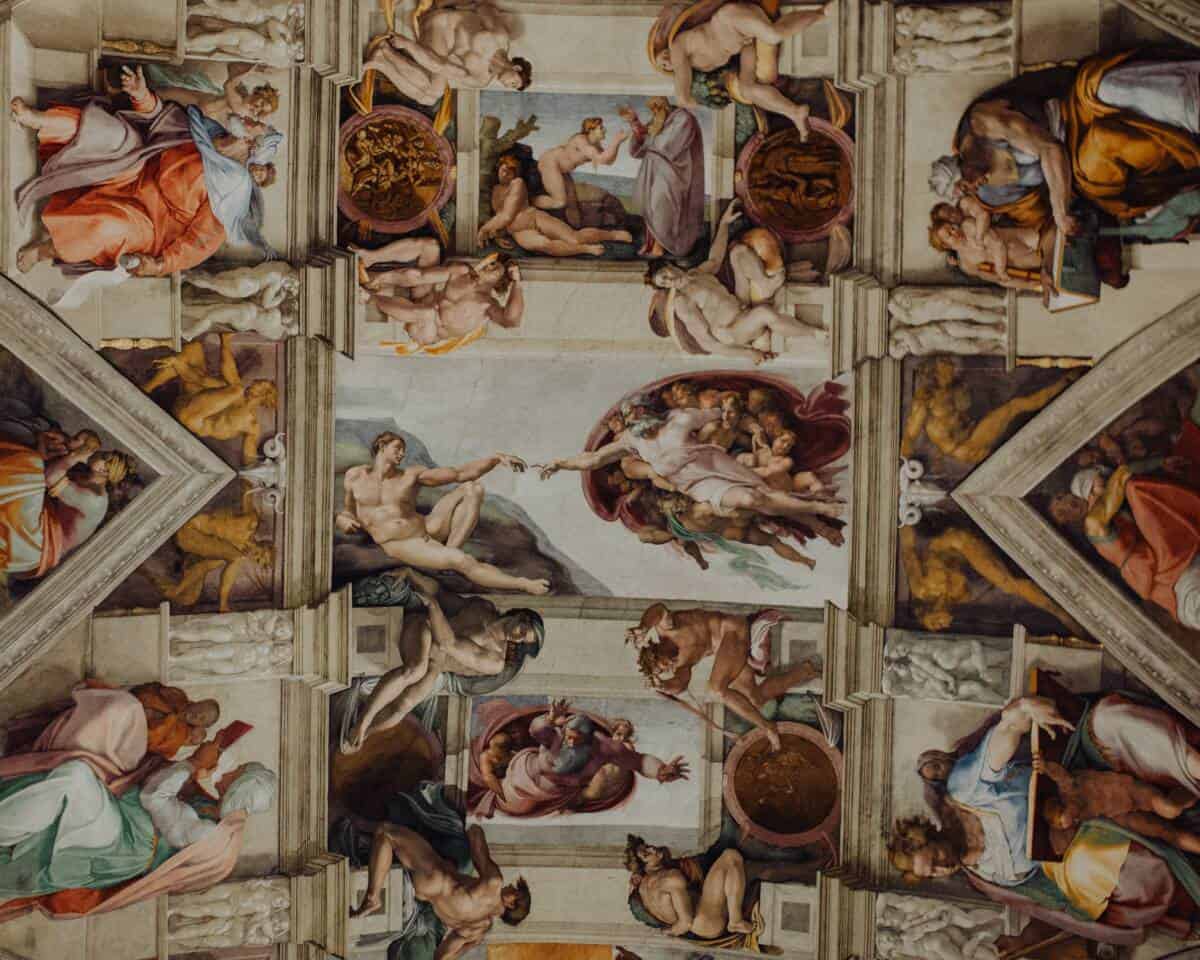 The ceiling of the Sistine Chapel is one of the most famous frescoes in the world and unsurprisingly it’s one of Rome’s most visited and valued historic sites. Set within the Vatican City and Museums, the Sistine Chapel welcomes around 25,000 visitors a day who flock to see Michelangelo’s (the painter, not the Ninja Turtle that is) masterpiece and marvel at the feat of artistry. Bad news for everyone who is addicted to their cameras … they are banned, so you’ll really have to enjoy the experience and in case you run into someone here are 25 fascinating facts you can brag about.

facts about the sistine chapel

1. The Sistine Chapel takes its name from Pope Sixtus IV

who commissioned the chapel’s construction on the foundations of the original Capella Magna in 1477.

2. It was Pope Sixtus IV who invested money into building the chapel and some draw similarities between its new layout and that of the Temple of Solomon described in the Old Testament.

3. Before work started on the ceiling of the Sistine Chapel in 1508, it had been decorated with a fresco of a blue night sky with golden stars, painted by the Umbrian artist Piero Matteo d’Amelia (poor Piero)

4. When Michelangelo was commissioned to paint the ceiling of the Sistine Chapel, he actually wasn’t very pleased, as his main artistic profession was to sculpt (we all know the Statue of David).

so much that in 1509 he even wrote a poem lamenting to his friend Giovanni da Pistoia how he’d “grown a goiter from this torture”, due to the physical strain of the work.

6. Although many believe Michelangelo painted the ceiling lying on his back, he actually constructed his own scaffolding, so that he could paint standing up for more precision and control.

7. The whole area of the ceiling of the Sistine Chapel measures about 1/6 of a football field (that’s around 12,000 square feet)

8. Don’t be fooled into thinking the only works of art on show in the Sistine Chapel are those by Michelangelo. You can also see frescoes and works by Domenico Ghirlandaio, Pietro Perugino, Cosimo Roselli and Sandro Botticelli.

the fresco and he left God until last … obviously wanting to have refined his technique enough to depict him perfectly.

10. The God Michelangelo painted as an older man with flowing grey hair inspired centuries of Christian paintings to come, later turned it into the archetypal representation of all Godly figures around the world.

11. The Last Judgement wasn’t actually painted in the same time as the great ceiling fresco. In fact Michelangelo returned twenty-two years later to begin his masterpiece on the wall above the altar.

12. It’s hard to believe that Michelangelo completed the entire ceiling without being able to review his piece as a whole, since the scaffolding remained in place right until the very end. This means that the first time Michelangelo saw his work, was the time it was unveiled!

13. Although the ceiling and frescoes are near-perfect, there is one tiny part of the sky in the panel depicting Noah’s escape which is missing. This is because of an explosion at a gunpowder depot in 1797 that caused the plaster to fall off.

14. There have been many analyses of The Last Judgement and the allegories and representations within the paintings. Some believe The Creation of Adam draws many parallels to the anatomy of the human brain due to the way it has been painted with the stem, frontal lobe and artery (which makes sense given Michelangelo’s expertise in human anatomy.)

15. Other interpretations include Saint Bartholomew holding the skin of a self-portrait of Michelangelo himself…

16. Among the things that couldn’t be misinterpreted were the nudes painted in the frescoes. In 1564, the Council of Trent deemed the images inappropriate and Daniele da Volterra was ordered to cover them up by painting fig leaves, clothing and other items to hide their indecency.

17. But, some of the drapes were removed to reveal the original painting during the big restoration efforts of the 1980s-1990s.

18. Another recurring motif is the acorns which populate the frescoes. This is a nod by Michelangelo to the patronage of Pope Sixtus IV, whose family name was Rovere – meaning oak, in Italian.

19. The Sistine Chapel is now a historic building

of such acclaim that over five million people come to visit a year …  that’s equal to the population of Norway!

20. It’s not only visitors who pay homage to the Sistine Chapel. It’s also the Pope’s private chapel (perks of the job!), guaranteeing a few extra visits.

21. Come election time for a new Pope, the College of Cardinals meets at the Sistine Chapel – as they have done since 1492 – to submit their votes under oath.

22. The process is so intense that there’s even a room nicknamed the Room of Tears to represent the emotion the lucky chosen candidate will feel after winning the election.

23. It’s not just photos that are banned during visiting times to protect the colours from fading. During election time the College of Cardinals also has to be scanned for bugs before entering.

24. If you have exposed shoulders or are wearing items of clothing that ends above the knee, you will be refused entry or asked to cover up within the Sistine Chapel. So make sure to dress appropriately.

25. The most dangerous thing about tourists visiting the Sistine Chapel is the damage not visible to the naked eye. The sweat, carbon dioxide and skin flakes of the five thousand visitors a day pose a threat to the restoration of the masterpiece.

The Sistine Chapel will forever be one of Rome’s most popular places to visit thanks to the sheer scale of the masterpiece and the feat of exceptional artistry. Thanks to its location within Vatican City, the Sistine Chapel will remain protected and upheld by Papal traditions and forever considered one of the most important religious destinations in the world.