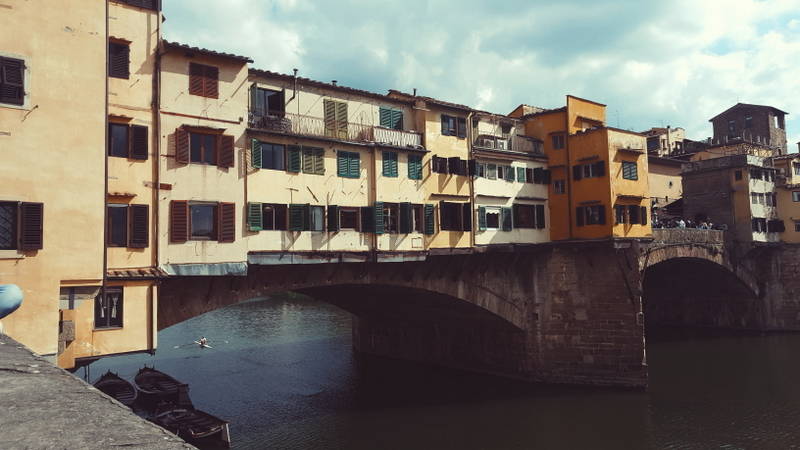 Having soaked up the coastal vibes in Cinque Terre, I headed inland to Florence to spend a few days in the birth place of not only the Renaissance but also ICE CREAM (gelato). There’s also a Michelangelo’s David if you’ve heard of that.

So today I’m sharing some yes, no, maybes for your first time Florence experience. 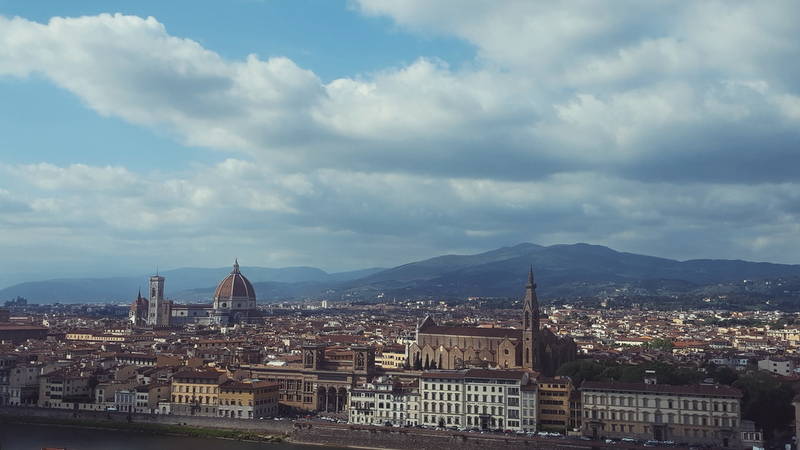 Walk up the Piazzale Michelangelo for the best free photo opp. It’s apparently the place to sit on the stairs, with wine and cheese and watch the sun go down. But the sunset didn’t blow me away, so it must have been the sitting and wine that makes it really shine. I was more interested in a group of guys drinking in some courage and trying make contact with a group of girls only to end up taking photos of another group (fail!).

My favourite attraction was the Ponte Vecchio, the oldest bridge in town that was once it was home to butchers, fishmongers and tanners. But that smelled too much for the Renaissance guys so it was turned into jewellery and goldsmith shops. Now it’s mainly full of stinking tourists, so you may still need to hold your nose… 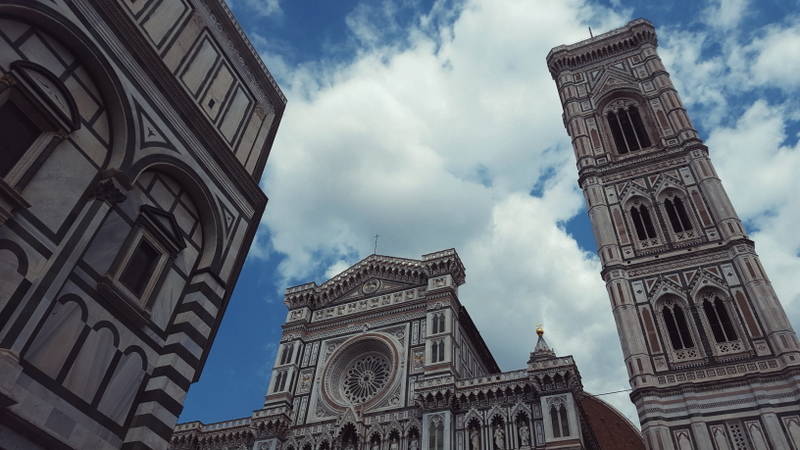 The Basilica di Santa Maria del Fiore or Il Duomo is Florence’s most iconic landmark and dominates the city scape from every corner. You also climb to the top and see the inside artwork for €10. But keep in mind there’s a ton of queues and you’ll likely spend more time waiting than walking around inside. 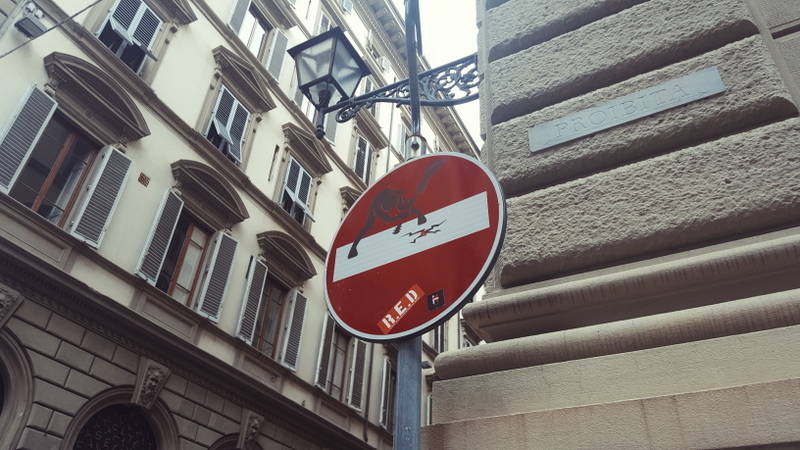 In the historic city centre you won’t see any street art or murals, but instead the street artists have focused their creativity on the traffic stop signs. So keep an eye for those – but also keep an eye out for traffic! 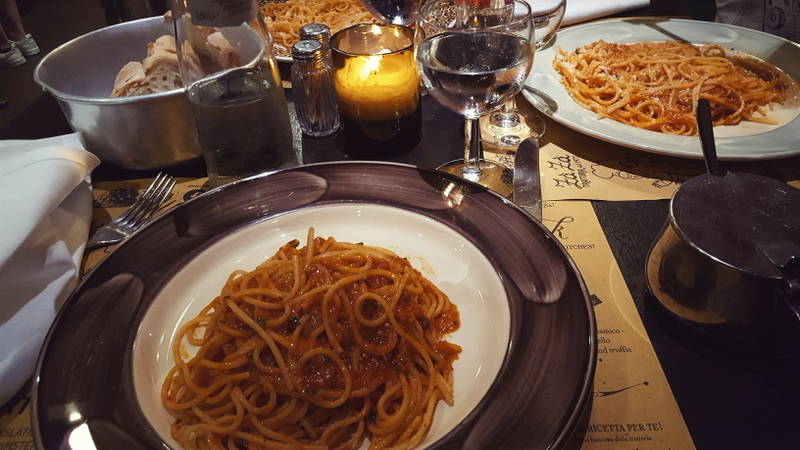 I can recommend two places: Trattoria Za Za, where pretty much every tourist stuffs their face – I loved the Boccalona-style spaghetti, but their menu was thicker than pasta at over 10 pages so there must be something for everyone. Then there is Boccadama, which has a  way smaller menu, but the thing you should go for is the lasagna, it’s so scrumptious that once you finish you want to gar-lick the plate clean. And as for the gelato, I only had it twice on my trip, but fellow travellers recomended Gelataria dei Neri, Fiesole and Carabe to get your ice cold sweetness fix. 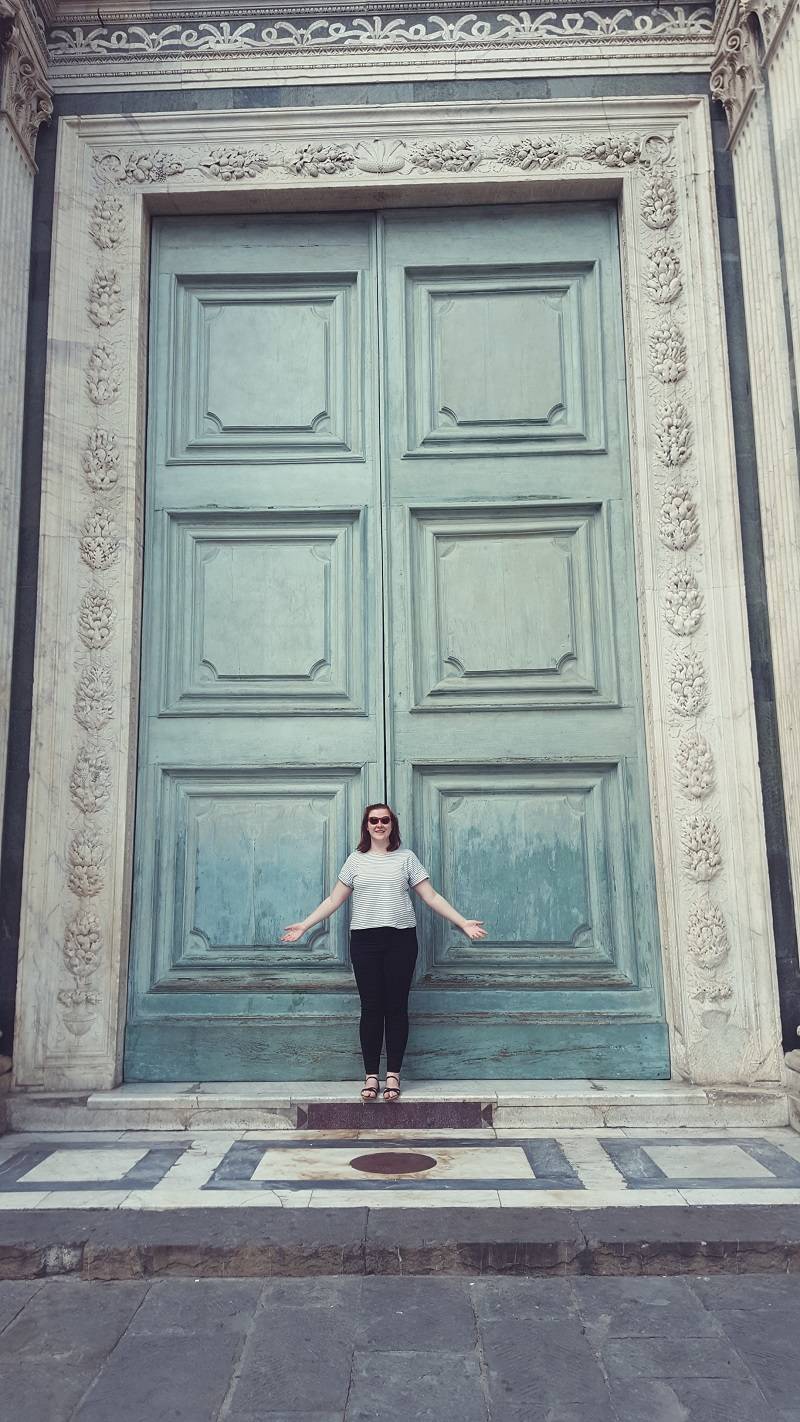 The Basilica of Santa Maria Novella is overshadowed by Il Duomo, but is as gorgeous. The first great basilica has some great the history that the tour guide explained, but that I can’t remember because I was too distracted by the gorgeous blue doors and imagining how much of a photo opp they would be like some instagram zombie. Turns out my friends were thinking the same same, so when we saw the opportunity we went for it but in our excitement we forgot to snap the rest of the building. 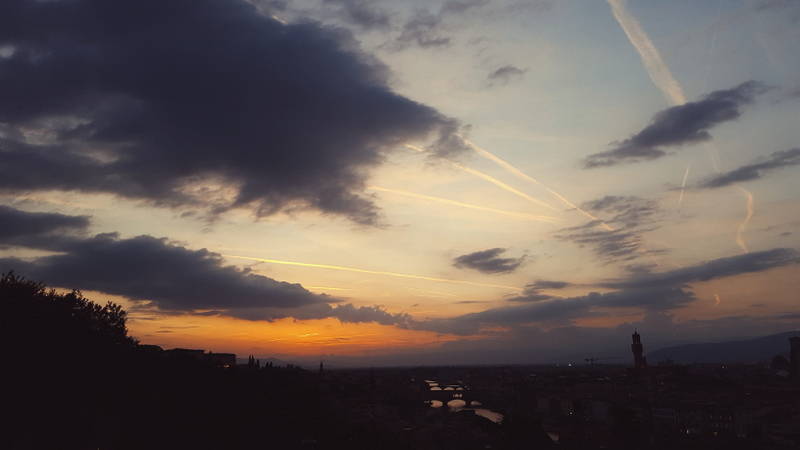 Don’t buy your bus ticket on the bus, it’s cheaper to get them at Tabacchi (newsagents) shop (look out for a T sign with a black or blue background). There are also multi trip and multi day tickets so plan ahead on where your accommodation is and what you want to do so you don’t waste too much money on travel

Talking about buses … no need to take the overcrowded bus up to the Piazzale Michelangelo, unless you are ok to go second base with at least four people (romantic eh!?). Instead wander through Oltrarno, a quiet neighbourhood compared to the rest of Florence and walk up via the Japanese gardens and then have an extra gelato to make up for it.

Or more of a definitely … but if you want to leave Florence cultured, inspired and smart AF you should visit one of the two big galleries. There is the Accademia which is home to David and there is the Uffizi, where Leonardo, Donatello, Michelangelo and Raphael and the Birth of Venus all hang out and gossip about the tourists. Fast track tickets to see David  were sold out by the time I knew I would be visiting and I didn’t feel like paying 24 euro for fast track tickets to see Birth of Venus. Don’t have time or budget to the Galleria dell’Accademia to see David? Hit up Palazzo Vecchio and check out the pigeon-shit-covered replica in its full glory for free! All the crap is more authentic right? 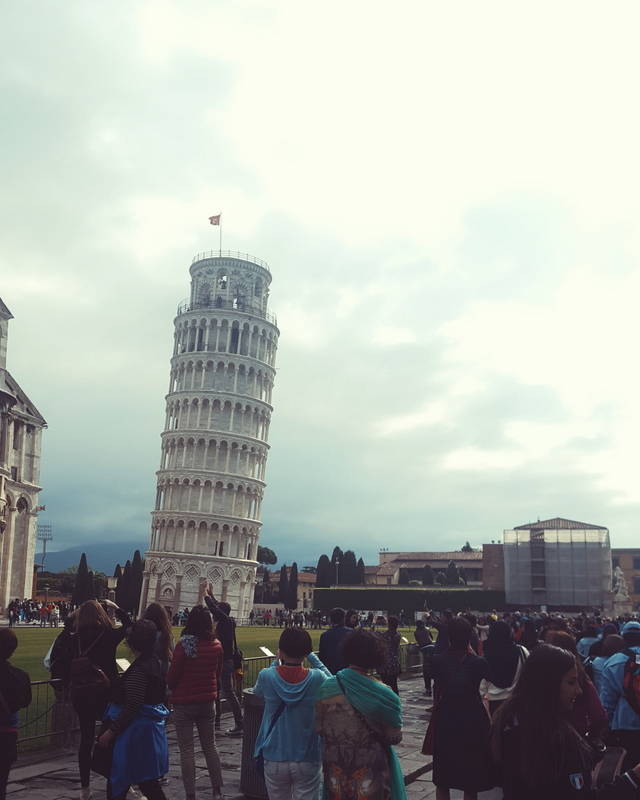 Get out of the city and take a day trip to Pisa. A day is more than enough wander around and do some hilarious poses at the Leaning Tower (though it might be more fun to watch other’s attempts), walk along the river and check out the multi-coloured Keith Haring mural.

Want to feel even more cultured? If you are in Florence between now (June) and 27th of July 2017 and you want to see an opera check the Maggio Musicale Fiorentino Festival, one of the oldest traditional cultural events in Florence, so you these guys do know how to put on a show. This seasons operas include: Rossini’s La Cenerentola and Il Barbiere di Siviglia, Verdi’s La Traviata, Donizzetti’s L’Elisir d’Amore. One of the other big events in the calendar is the Carnival in February – essentially a big bunch of colourful Renaissance-dressed people in a big procession along with musicians and dancers, starting at Piazza Ognissanti and wrapping up at Piazza della Signoria.

Have you been to Florence?

Pinterest is full with tricks and hacks to make our travels easier and simpler … But to me most of these ideas haven’t changed my life – they made me philosophically analyse them and question myself, and I came to the conclusion that they possibly made my life more complicated when they were…