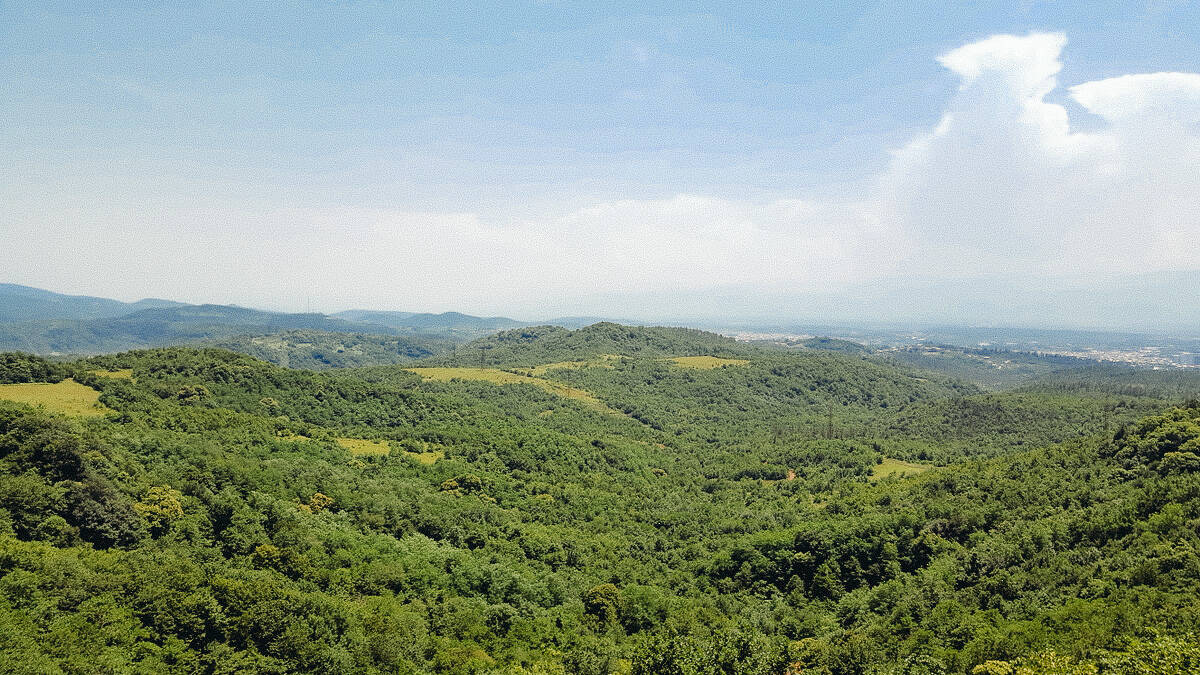 Previously on Teawashere…I may have written a bit about my trip to Georgia here , here and here. Last time I mentioned that the train from Tbilisi to Batumi was cancelled and that we decided to go back to Kutaisi to do the things we initially had on our to-do list, but which were cut short because of the cancelled flight – namely, visiting two caves and two canyons. Let’s get started with the caves – Prometheus and Sataplia to be specific.

Day-trip to the Caves Near Kutaisi, Georgia – How to Get There

If you book an organised tour you can do all four in one day really and have a pitch stop for lunch as well. It was actually recommended by people we ran into from our walking tour in Tbilisi, basically everyone on the internet and also most importantly, by the lady at the tourism office. She didn’t question us though, just pointed us to the direction where we managed to cram ourselves with the 13 other people in the Marshrutka minvan that was meant for 9 and could barely cross our fingers and toes that the bus was heading to the right direction. We were left in a parking lot and from there thankfully another mini bus took us on to our first cave of the day. 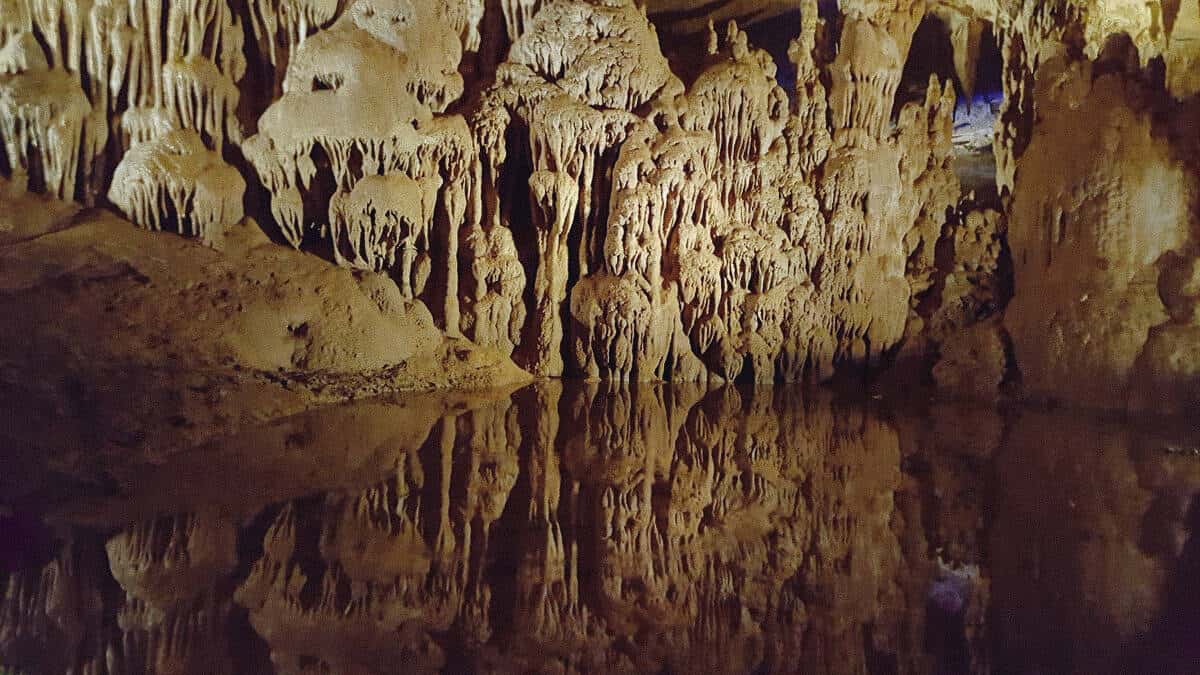 Self Organised Daytrip from Kutaisi to The Prometheus Cave

The Prometheus Cave isn’t visitable solo sadly, so you have to join one of their guided tours, which means a choice of an overpacked English or German/Russian tour. Don’t worry if you join the German/Russian and are afraid to miss out on any info as it’s not really a tour, they’re there to make sure you make it out alive and just mention which room of the cave you are in and don’t even bother to tell people to not take photos using flash. I guess they’ll realise once it starts affecting the caves, and they can’t make much as money from it. The caves are gorgeous, but nothing I haven’t seen before in France and Slovenia. Also, I sadly no traces of Michael Fassbender being there (bad film, but hot actor nonetheless). 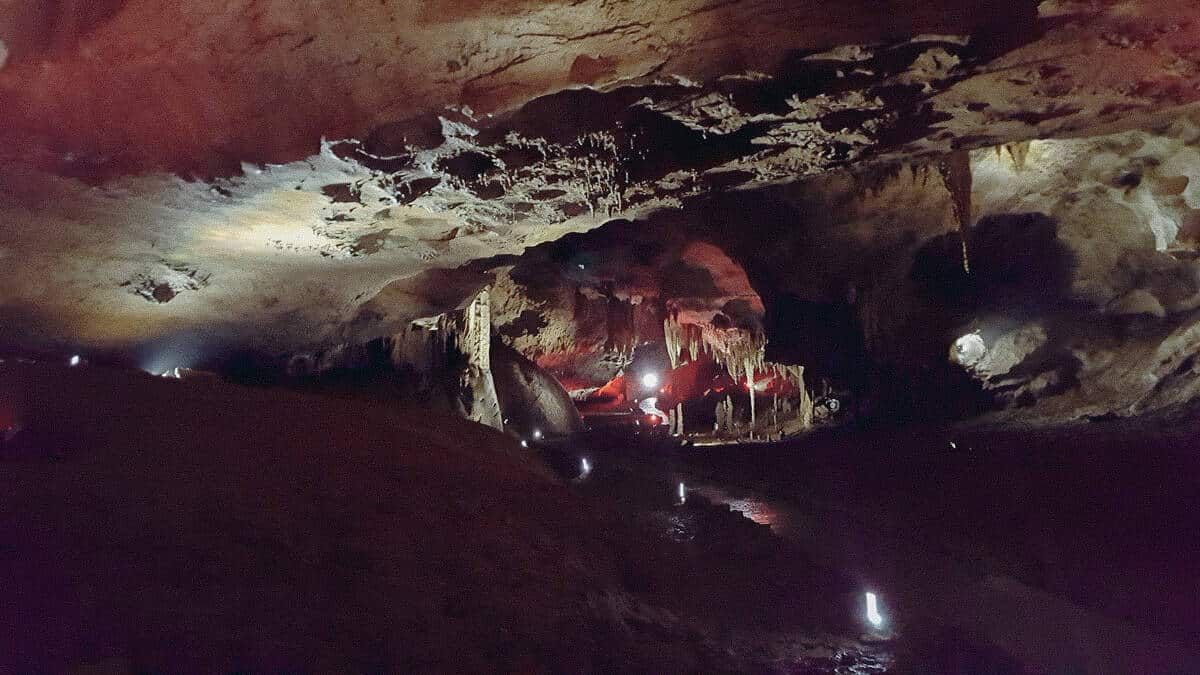 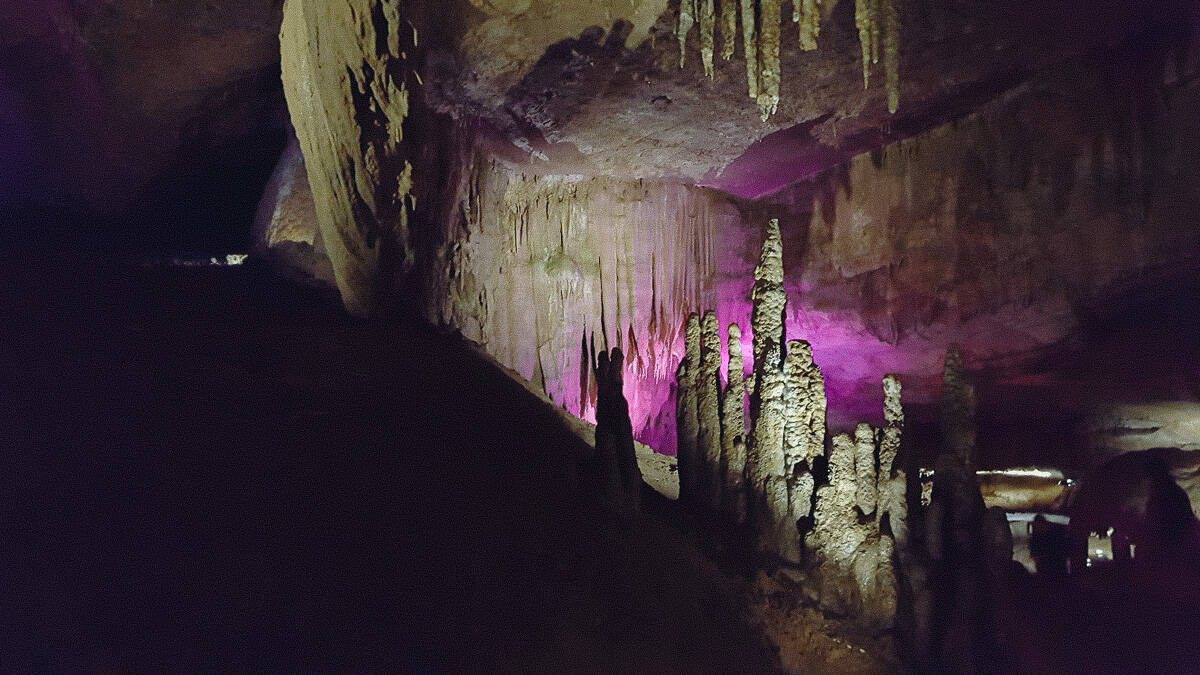 As we went to leave it turned out … the bus back was not coming for 1.5 hours and all the taxis on the lot were waiting for the smart people who had booked in advance….All of a sudden no one at the front desk understood taxi and us making a phone gesture. I don’t know how desperate we looked, but one driver and a woman came to us and the woman who spoke a bit of English explained the driver had to drive them to a nearby hotel, but he could drive us to the next caves back afterwards. Our angels. 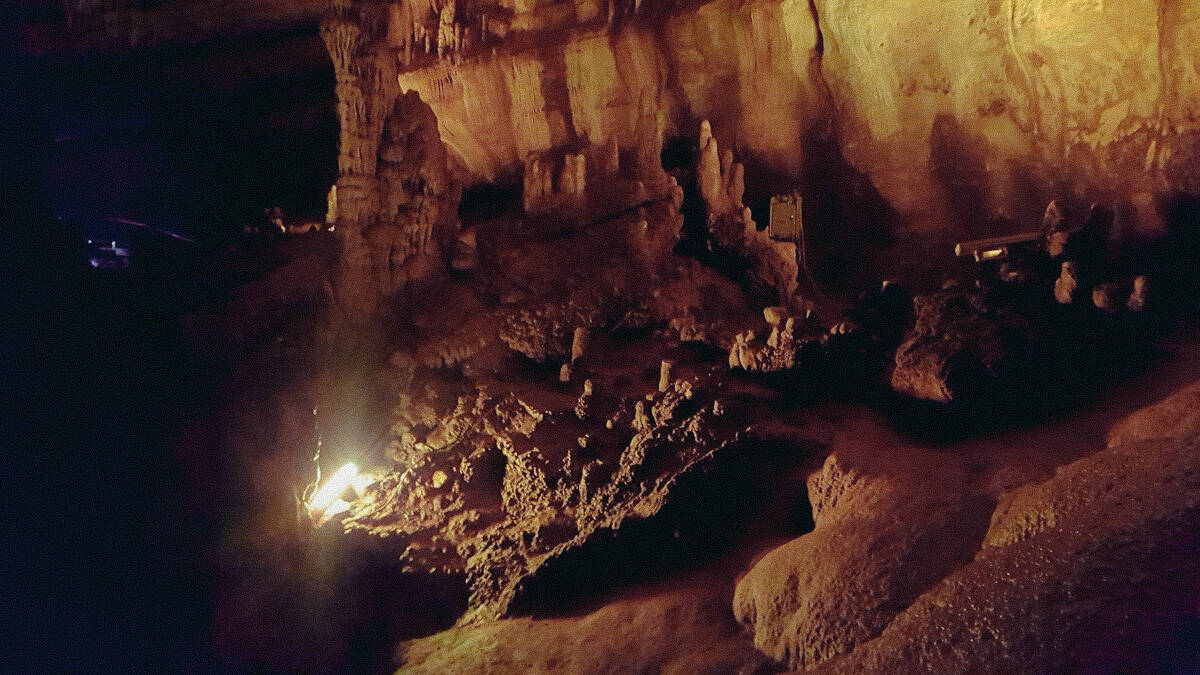 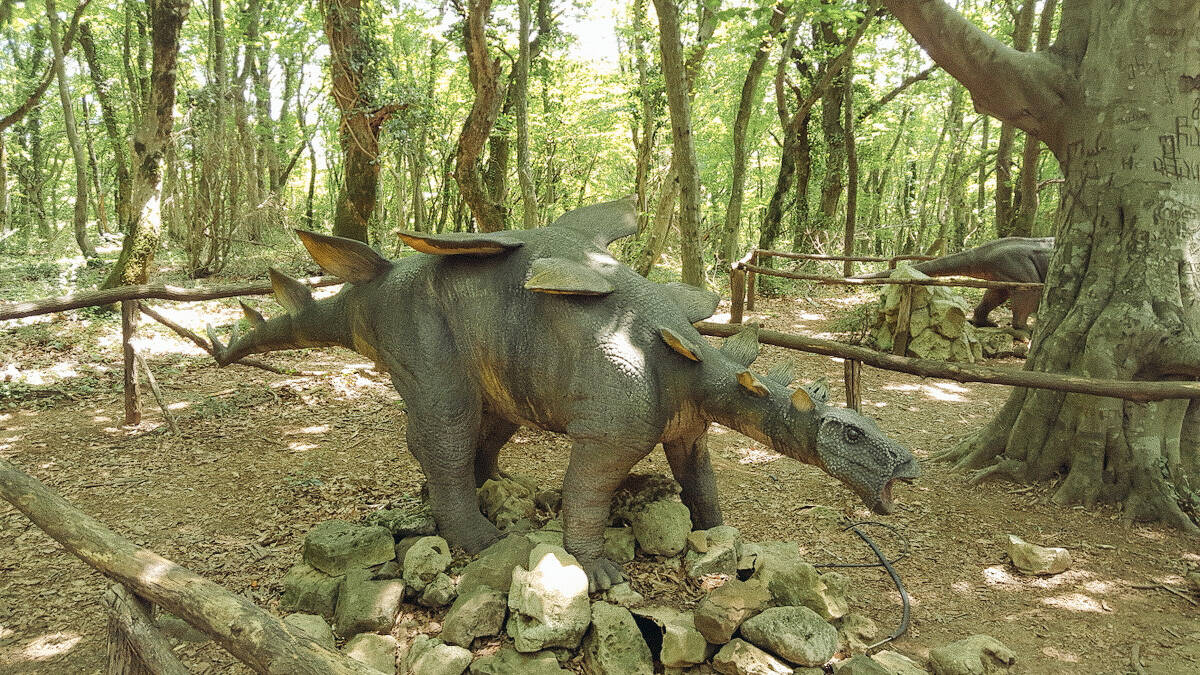 Self Organised Daytrip from Kutaisi to The Sataplia Cave

The Sataplia Cave is very small compared to the Prometheus Cave, but the forest area it’s in makes it a must visit. You can walk around and check out the dinosaur statues (though a lot of them were broken) and people sat on them for photo purpose, despite there being signs not to so. The winner of the day was the viewing platform with a building that looks like it could be the headquarters of a Bond villian. 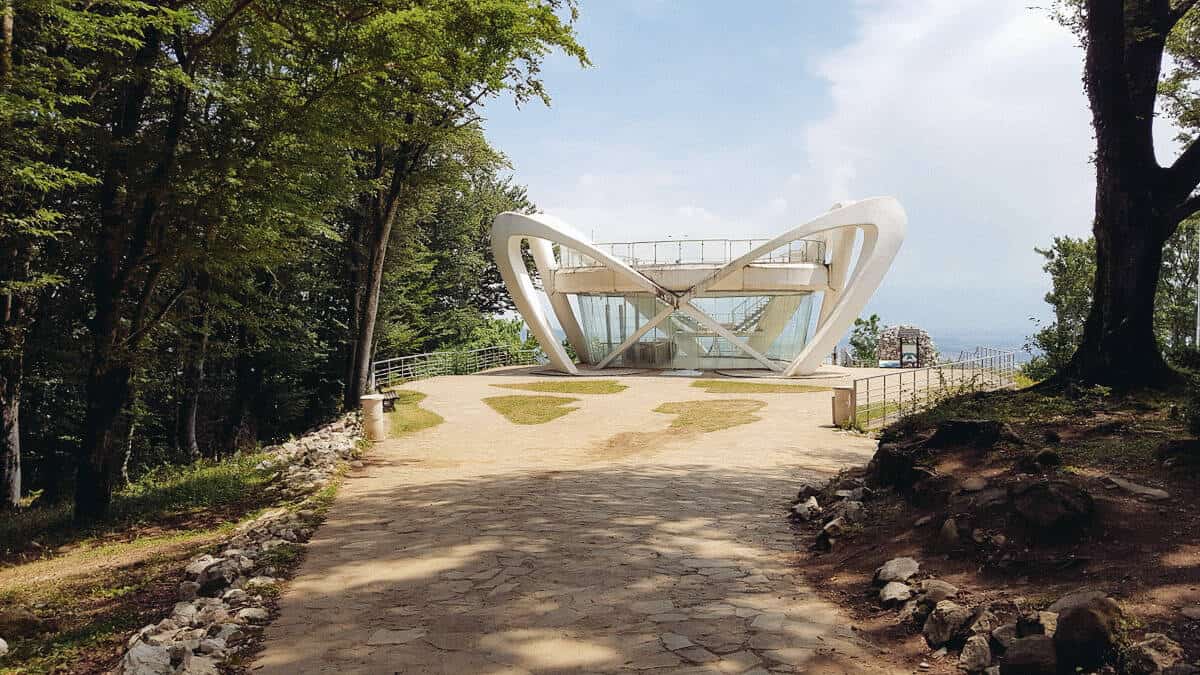 You would think a donkey would hit itself on the same stone twice … well this one does. We soon learned the bus didn’t go at all (?) or not for the rest of the day, despite us checking it earlier we will never know what happened. The people at the front desk were the friendliest though and called a taxi for us who brought us back to Just Inn, where we tried to communicate the drama to the super friendly owners, who didn’t understand a word but could feel our pain and shared their cherries with us. 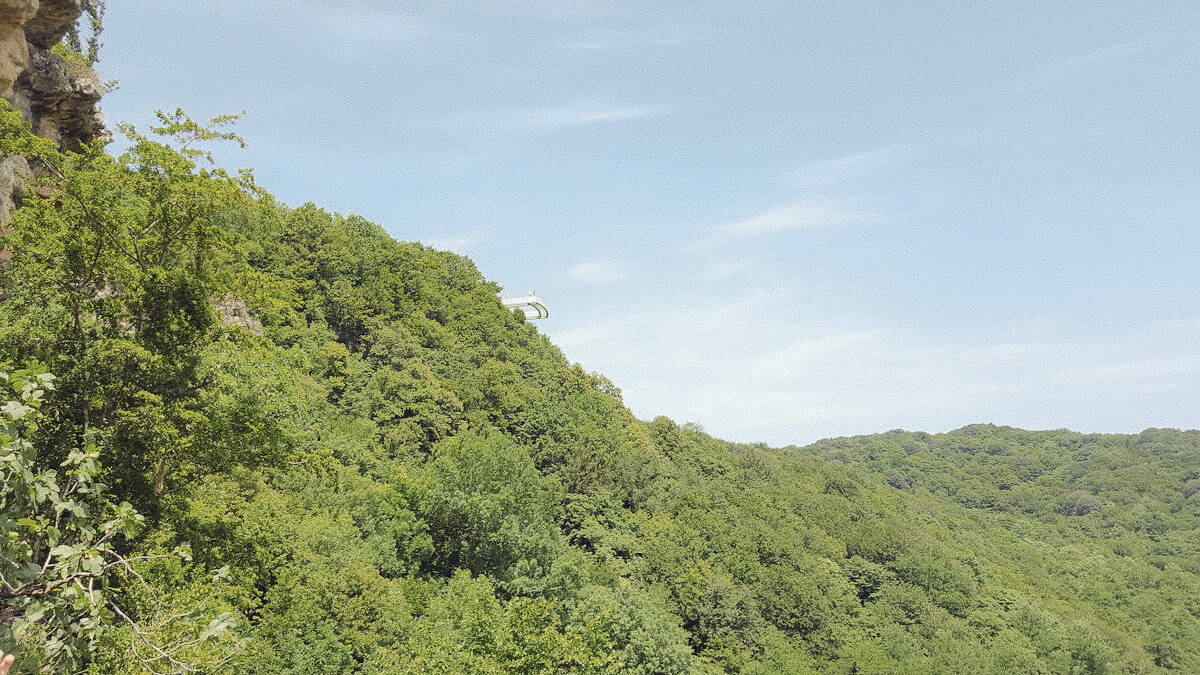 Lessons learned: sure it’s adventurous to go out on your own and do as the locals, but if you are in a place for a limited time and for relaxing purposes then book a tour so you don’t gain a grey hair or two.

Next time – if you think my cave trips were full of drama, then wait til you see what happened when I visited the canyons… 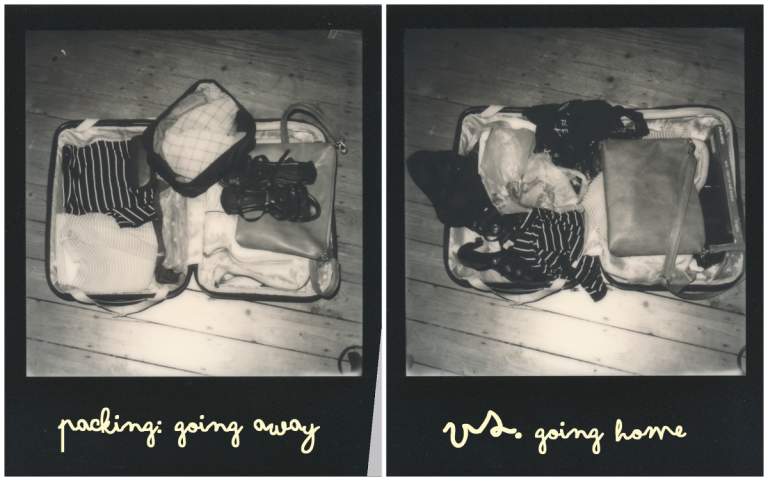 I went on an 7-day trip to Georgia (the country, not the state) and this is what I managed to cram into my backpack (Patagonia Arbor Grande Pack 32L) Where: Kutaisi (4 days) and Tbilisi (3 days). Weather: During my visit in mid-June it was hot, sticky and humid. Travel… 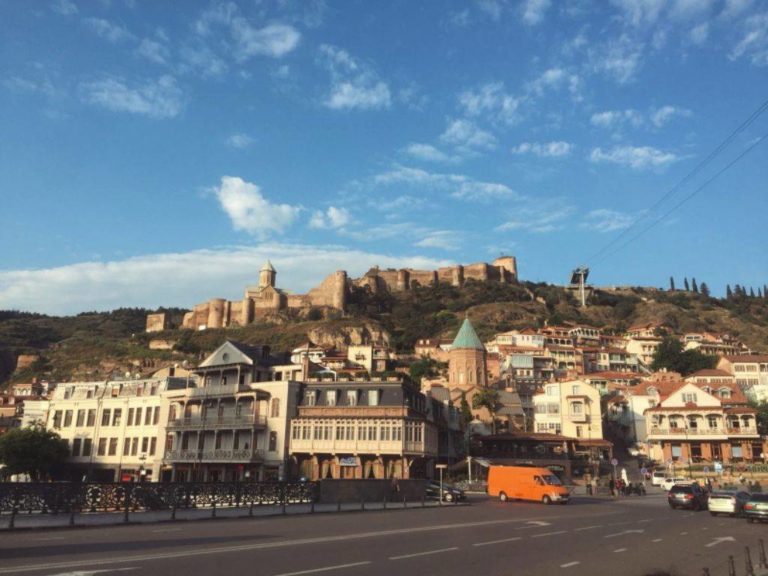 Following up on my time in Kutasi, here’s what happened on my rather up-and-down Georgian adventures when I finally reached the capital Tbilisi. That evening we exhaustedly arrived at our guest house. But drama struck again – our room was given to someone else and we given a sub-par alternative…

One random night me and my friend decided it was time for us to visit Georgia – no, not the US state and home of Coca Cola, but the little gem of a country that sits between Eastern Europe and Western Asia. But it wasn’t as easy as we thought…. 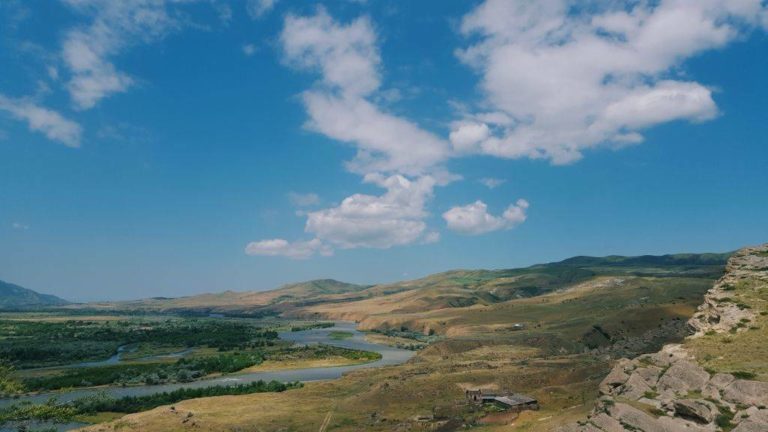 And now here’s part 3 of my Georgian adventure, where I experienced some impressive highs and some lacklustre lows… After having spent a day in Kutaisi and a day exploring Tbilisi it was time to head out of the city and see what the area around Tbilisi had to offer:…