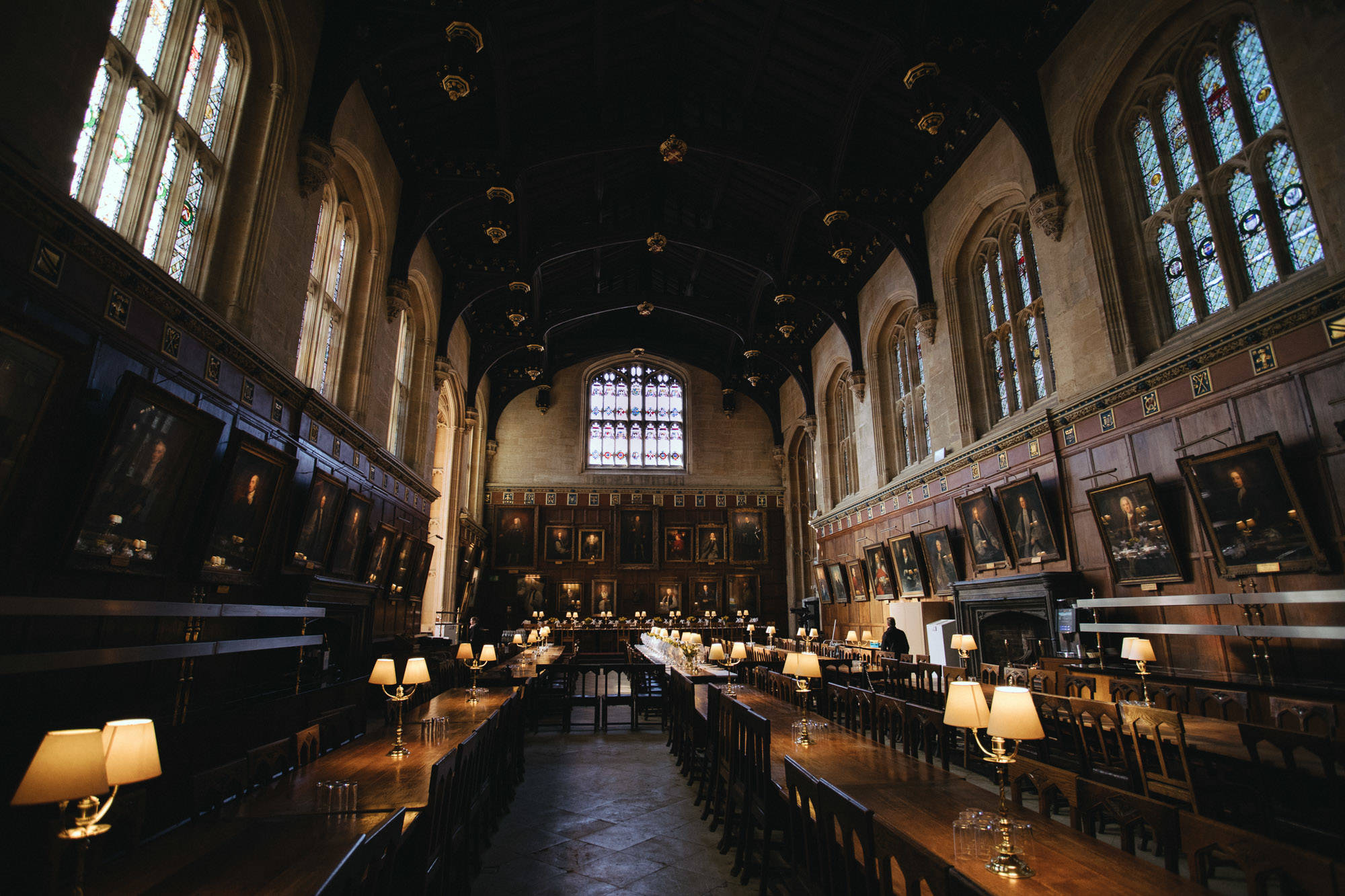 Oxford is a go-to destination for visitors wanting to explore beyond the tube map, but until recently I haven’t had the urge to go. Despite its history and being the birthplace for incredible books like Alice in Wonderland, His Dark Materials and Harry Potter, it wasn’t reason enough for me to take the bus, tube and train to actually go there. But as a stop off on my way back from the Cotswolds, I decided to see what the fuss was all about. 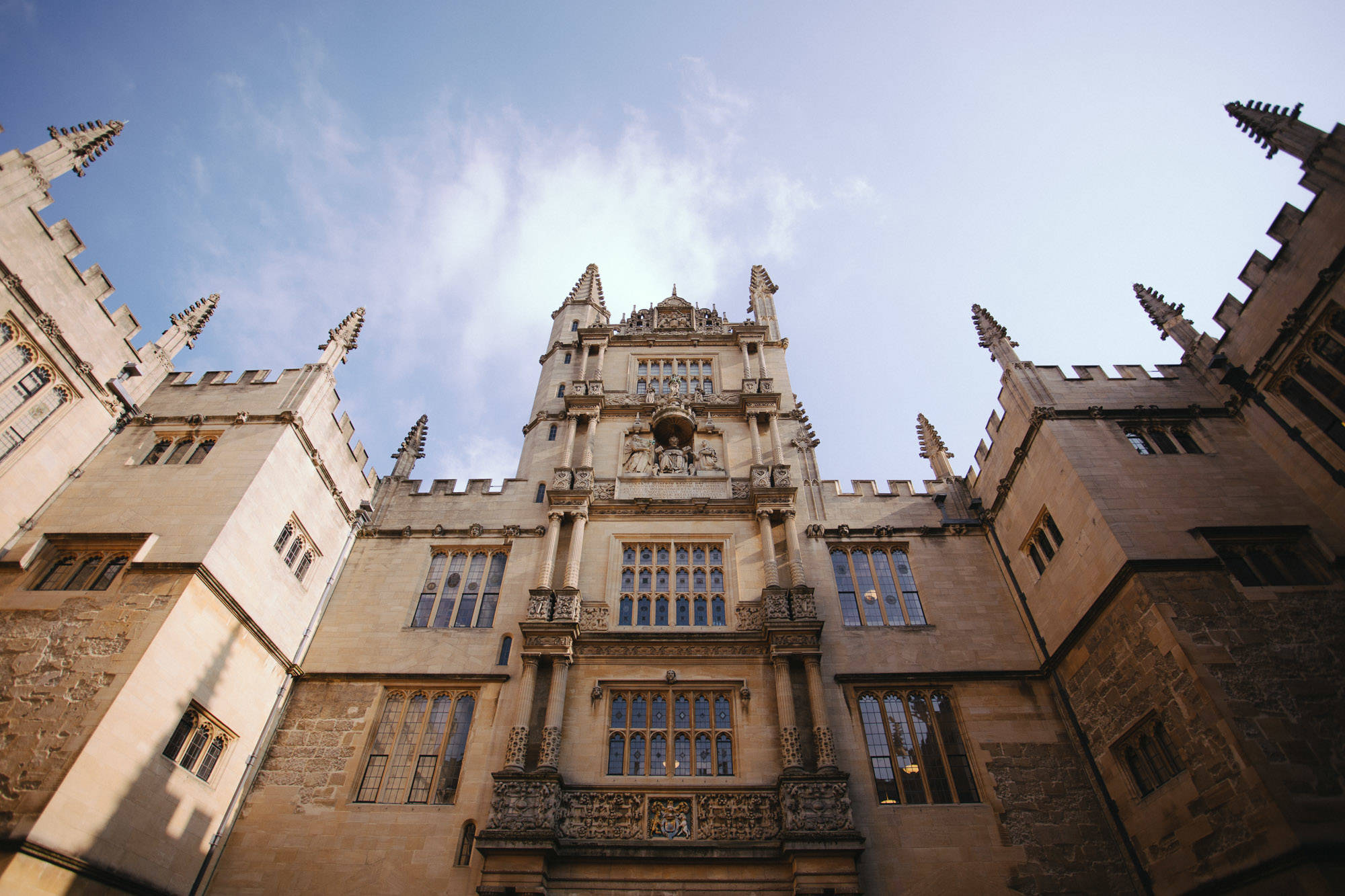 The train station and high street could be any generic British town and it’s not until you reach the college grounds before it gets interesting. They are like little villages, each with their own characteristics and look like they are something out of a magic world. 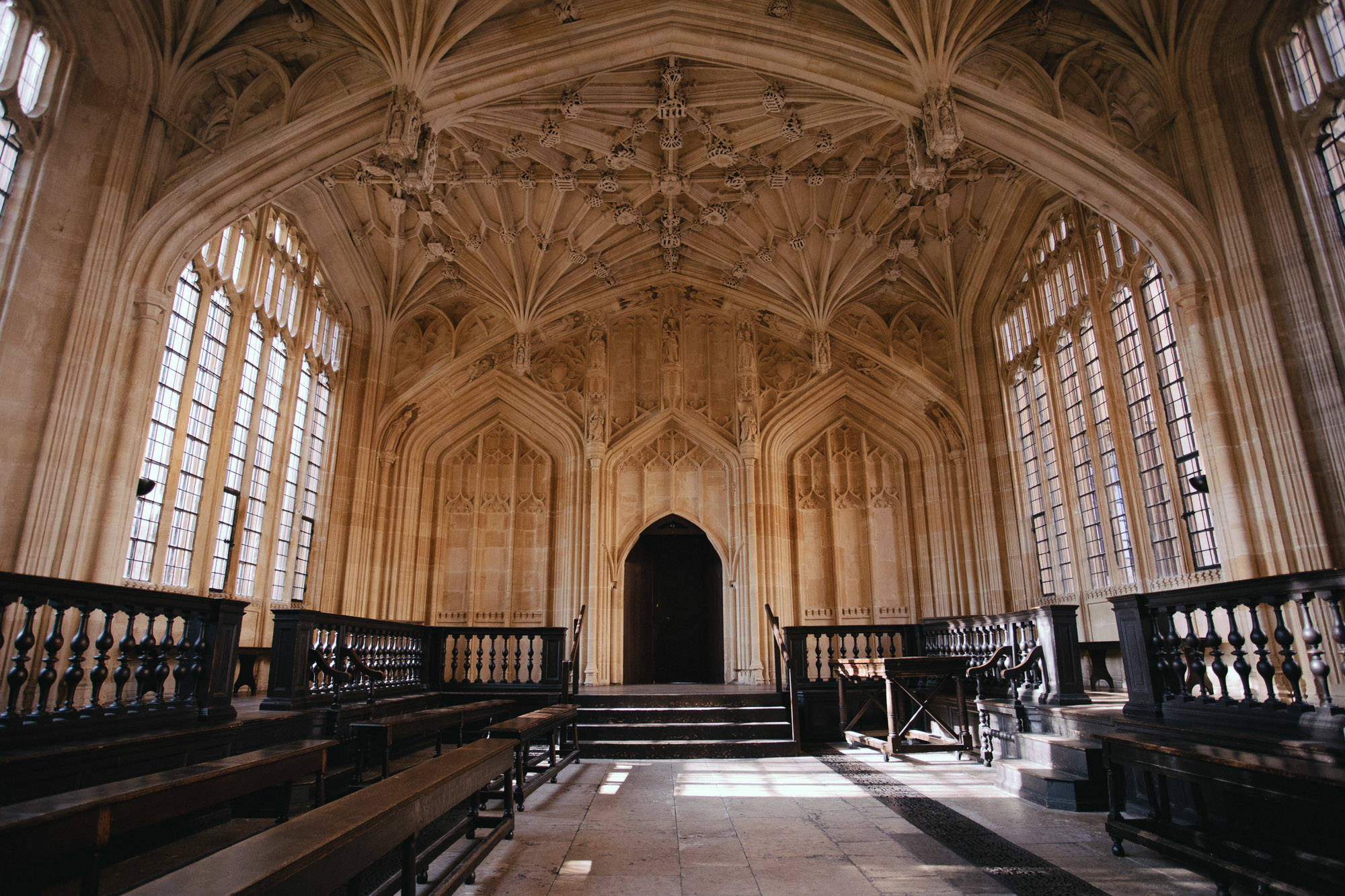 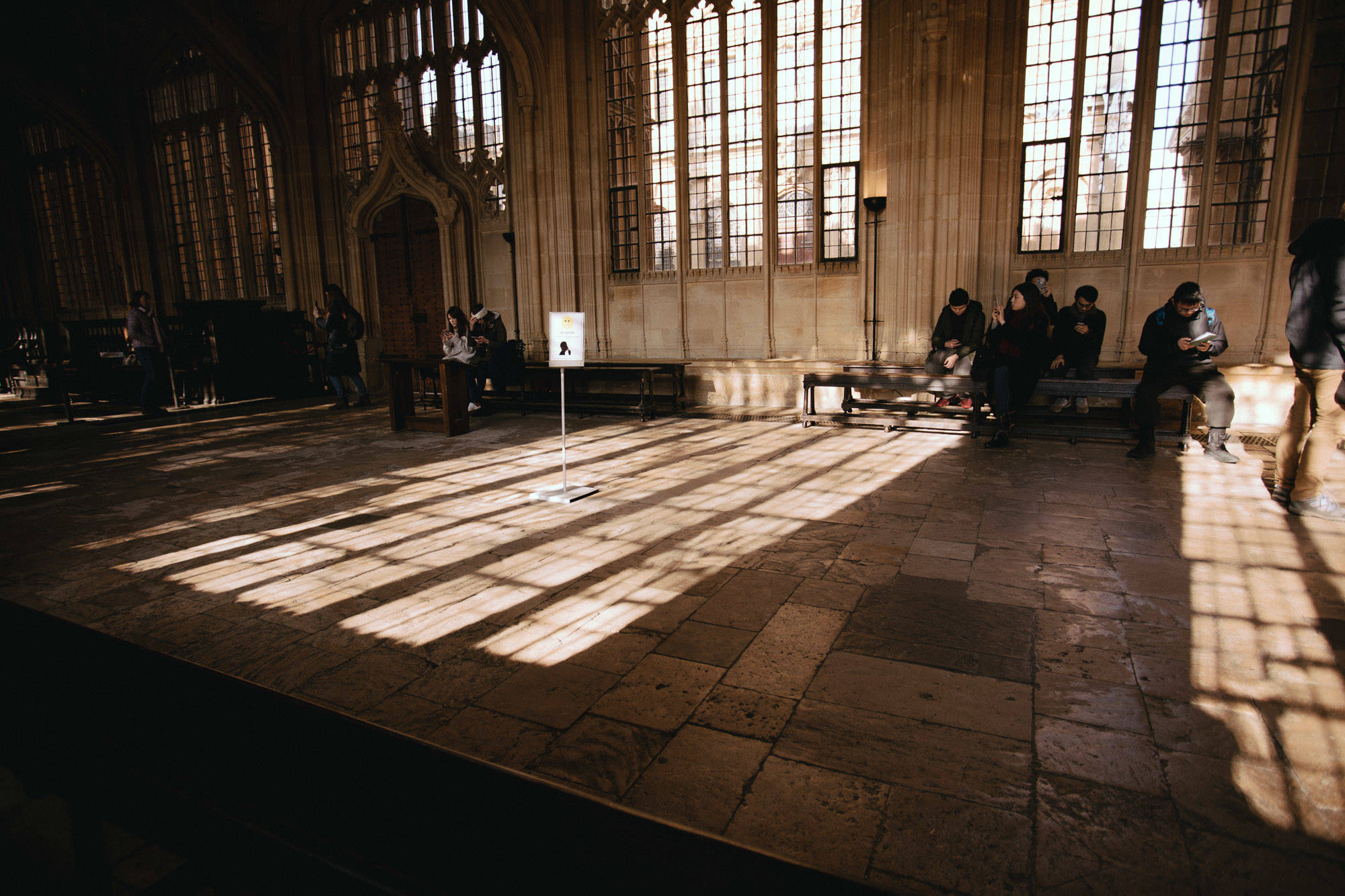 My first stop was the Divinity School at the Bodleian Library. Rather than going there to soak up its rich history (being the oldest surviving university building), most visitors were there to see the set for Hogwarts Infirmary in Harry Potter and The Philosopher’s Stone, as well as where the students learned to dance ahead of the Yule Ball in the Goblet of Fire. 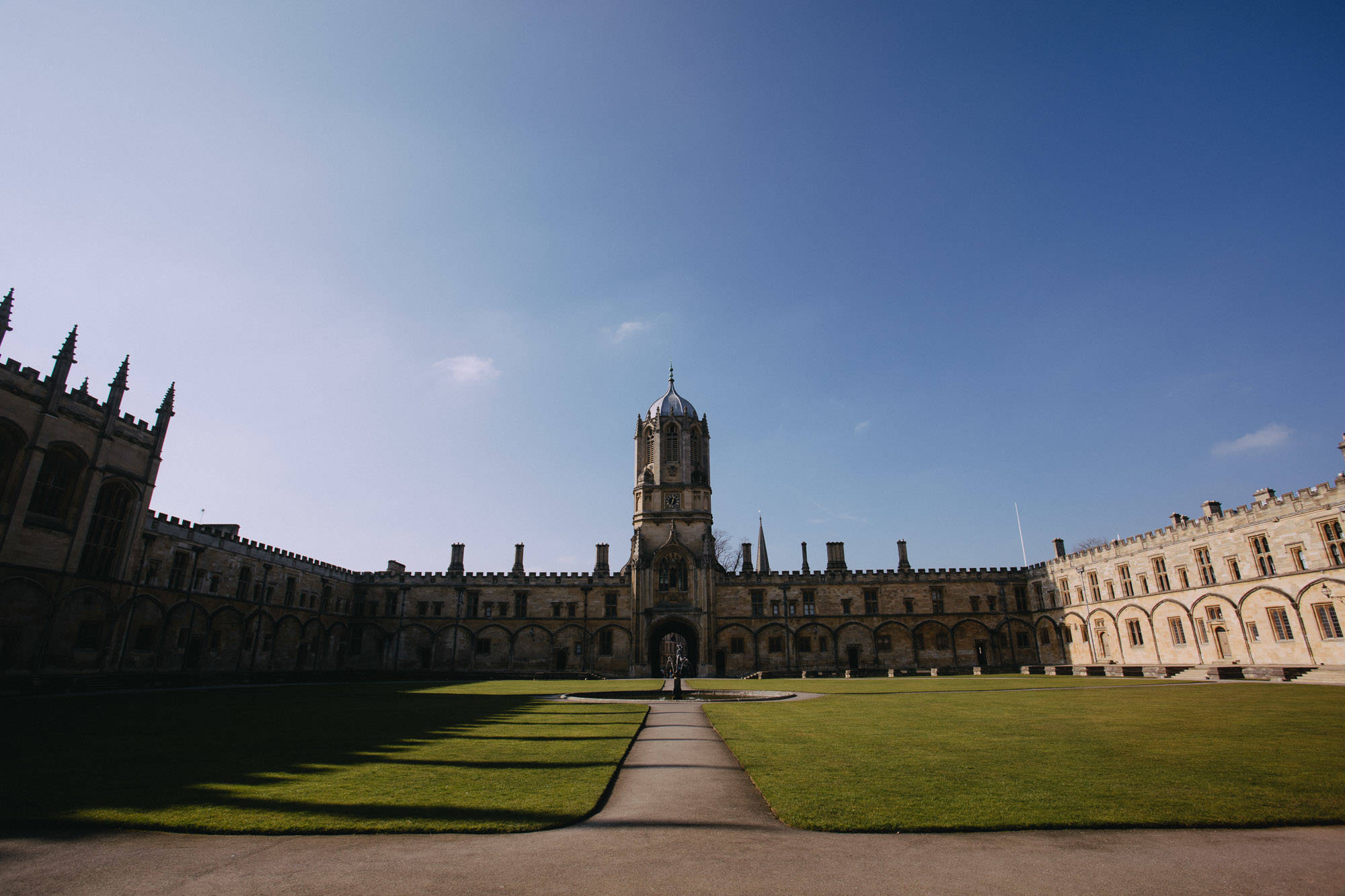 Next on everyone’s Potter tour was the nearby grand surrounds of Christ Church College. There’s a lot to see here, but let’s get the important wizarding stuff out of the way first. 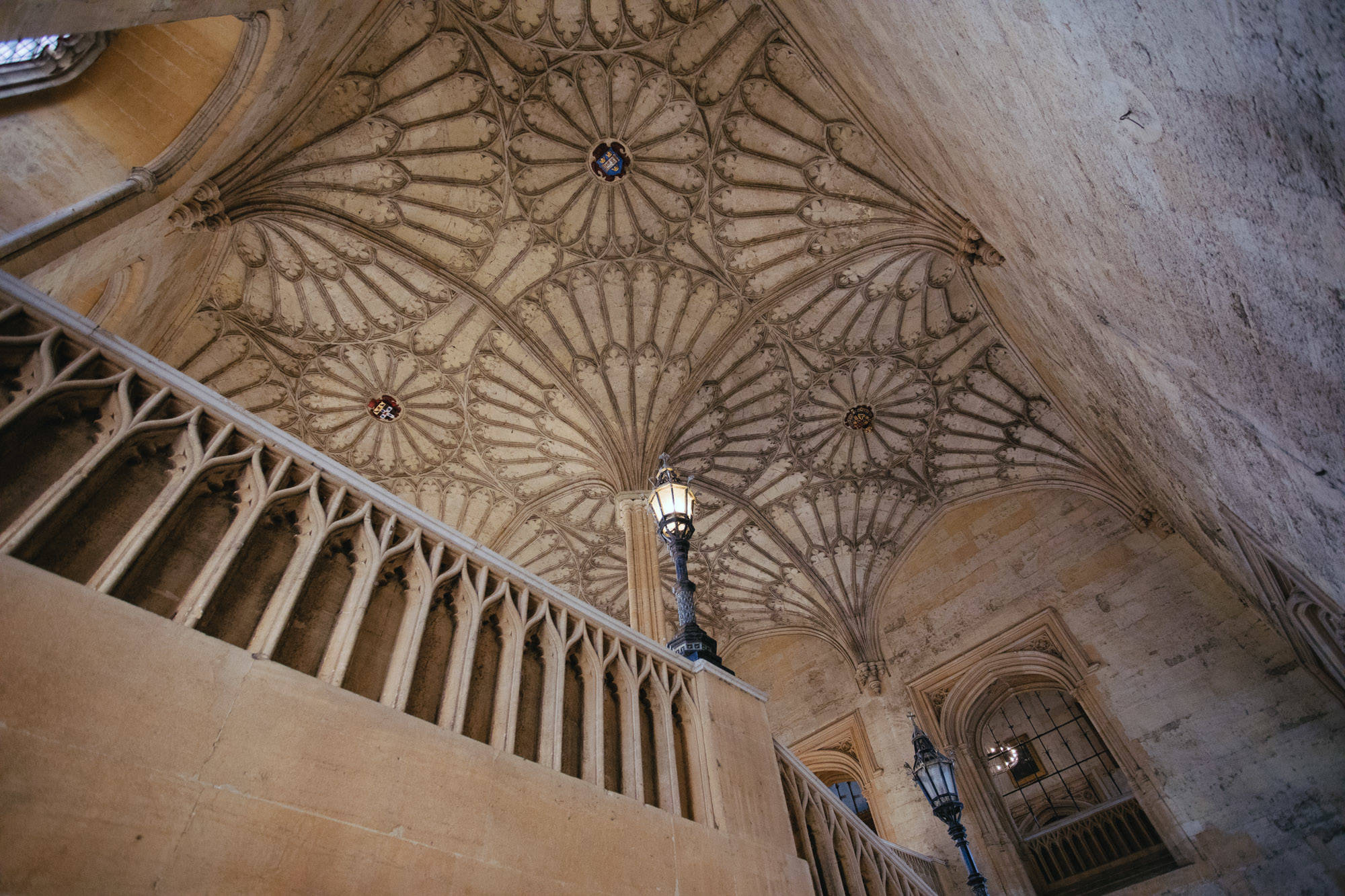 1.You’ve got staircases galore from The Philosopher’s Stone and The Chamber of Secrets. 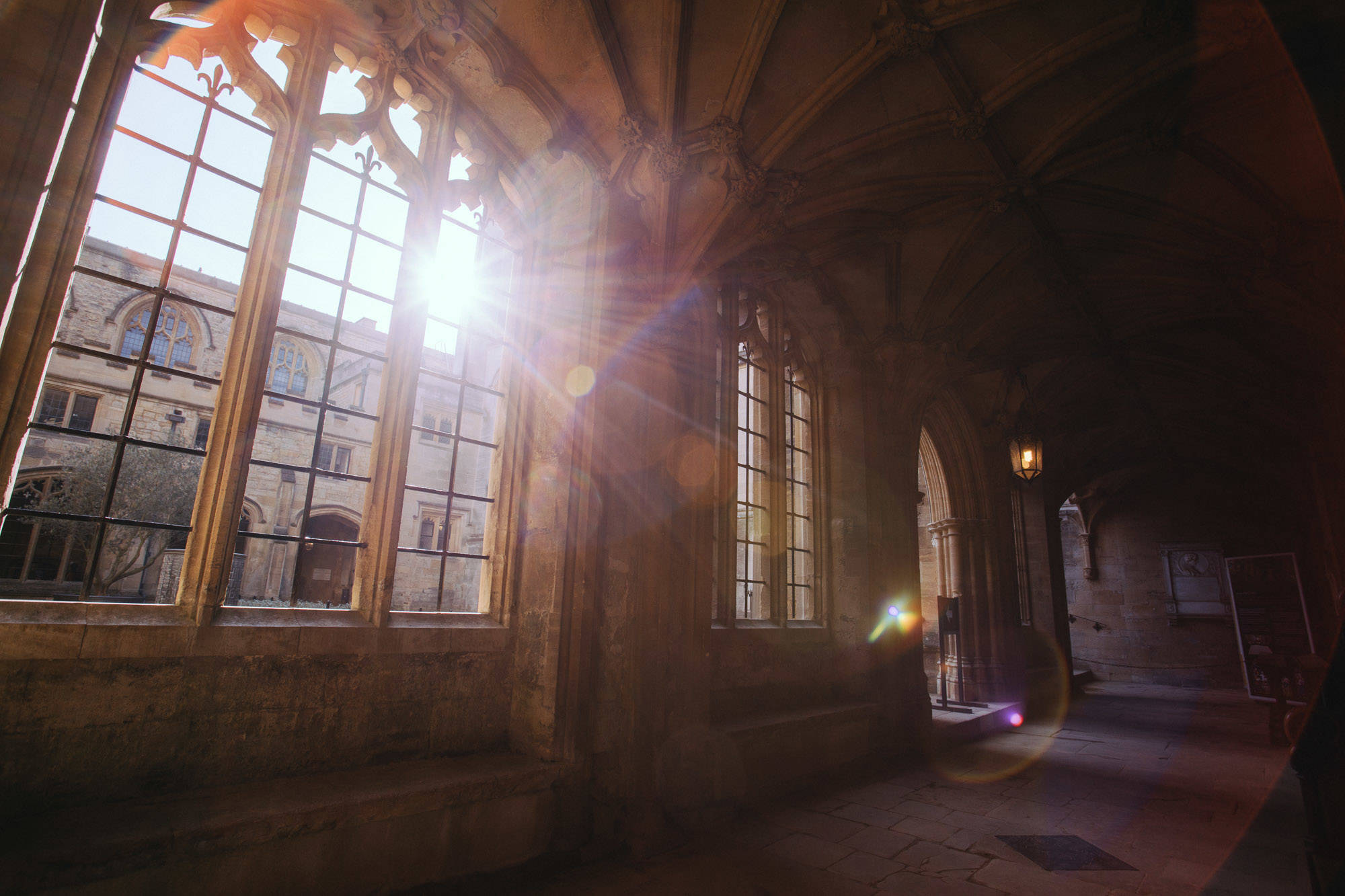 2. The cloisters where Hermione revealed to Harry that his father was a seeker during his time at Hogwarts. 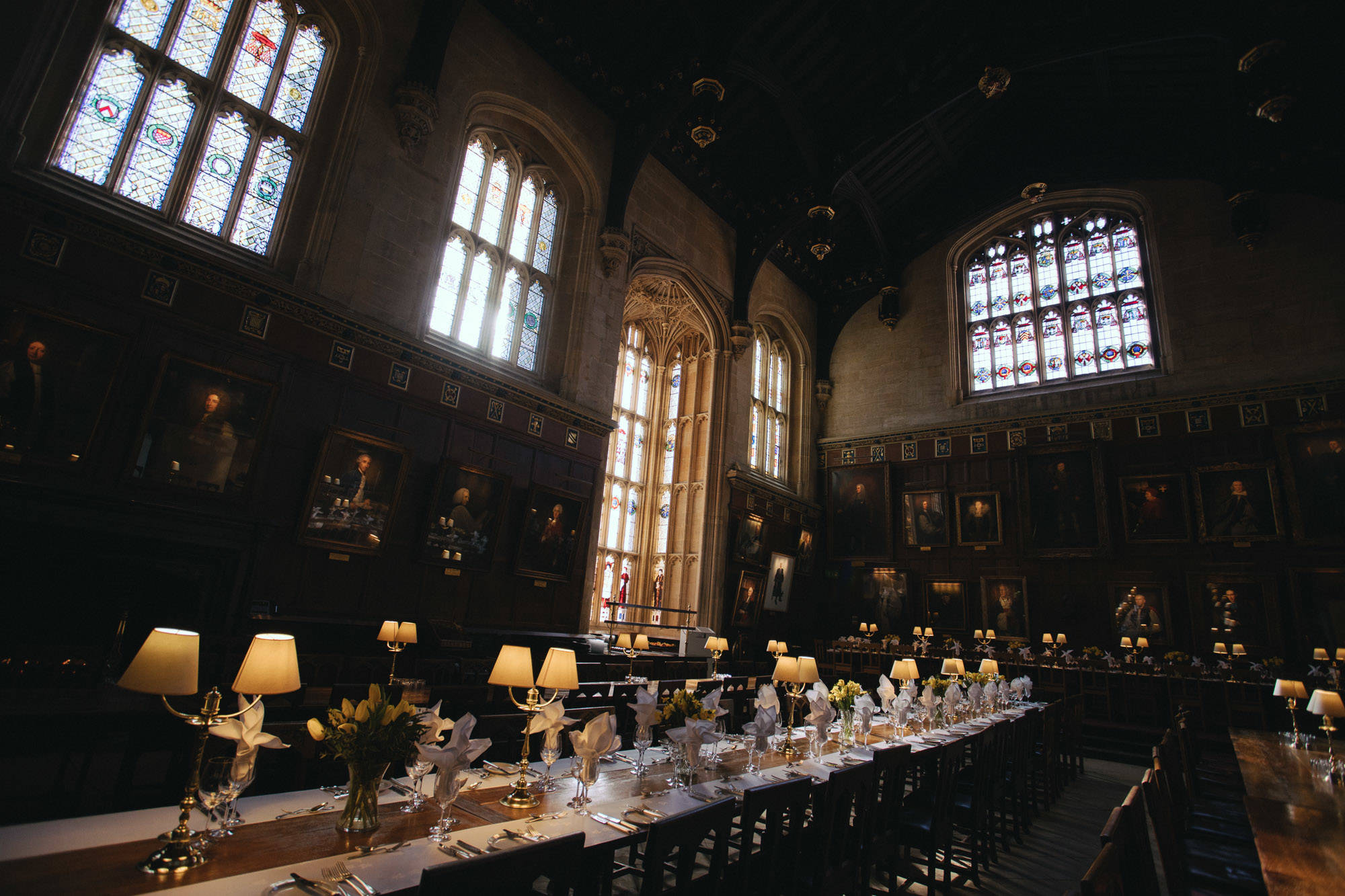 3. Last, but definitely not least, is the Dining Hall that inspired Hogwarts’ Great Hall. Sadly, they couldn’t actually film there as there weren’t enough rows of tables to represent the four houses and resorted to building a replica set in the Warner Bros Leavesden Studio. 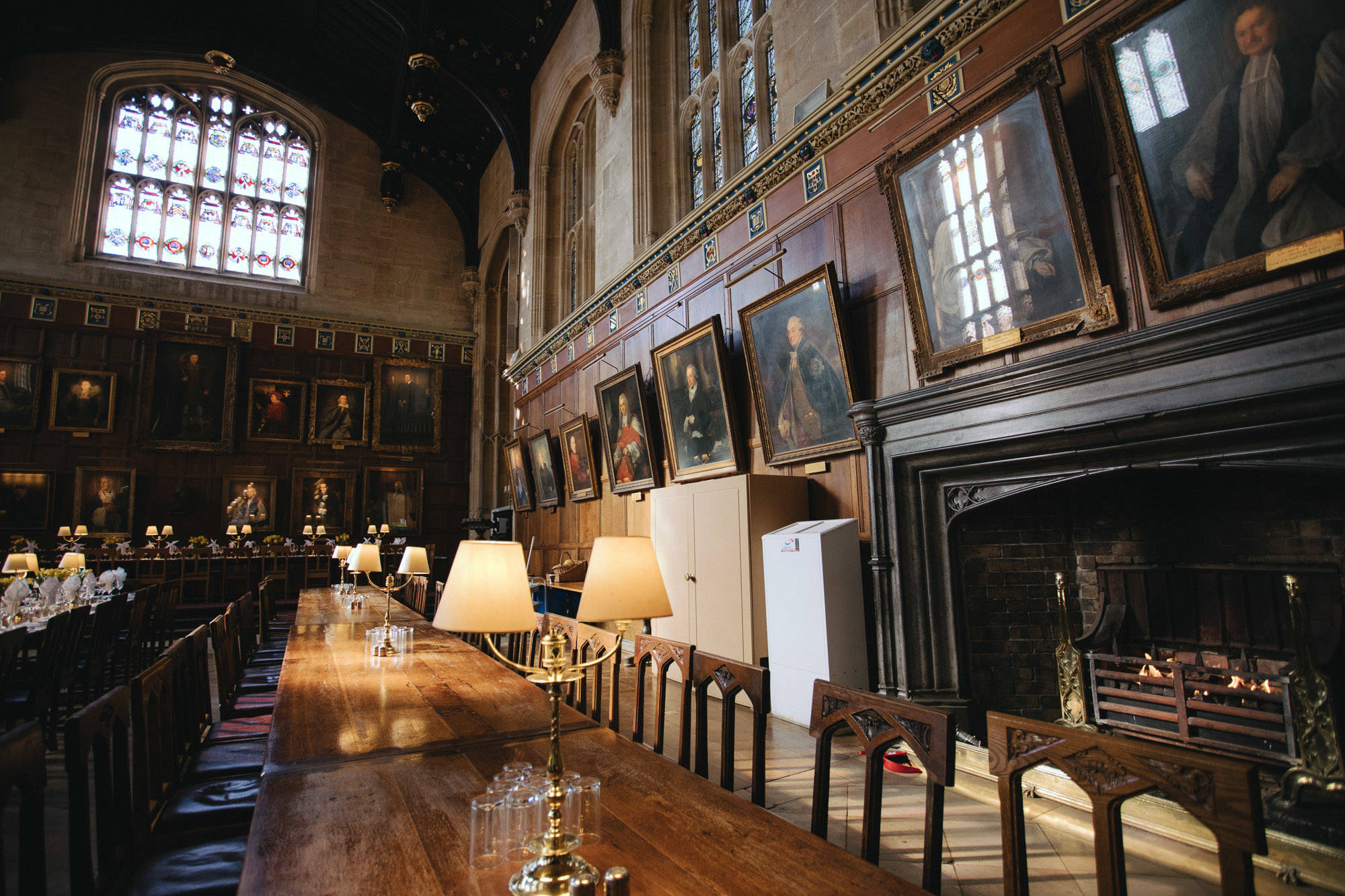 The Dining Hall didn’t only inspire JK Rowling, but also Charles Lutwidge Dodgson, better known as Lewis Carroll, who attended and taught at Christ College and was friends with the Dean. See those figures on each side of the fireplace? They inspired Alice with a long neck when she won’t stop growing. 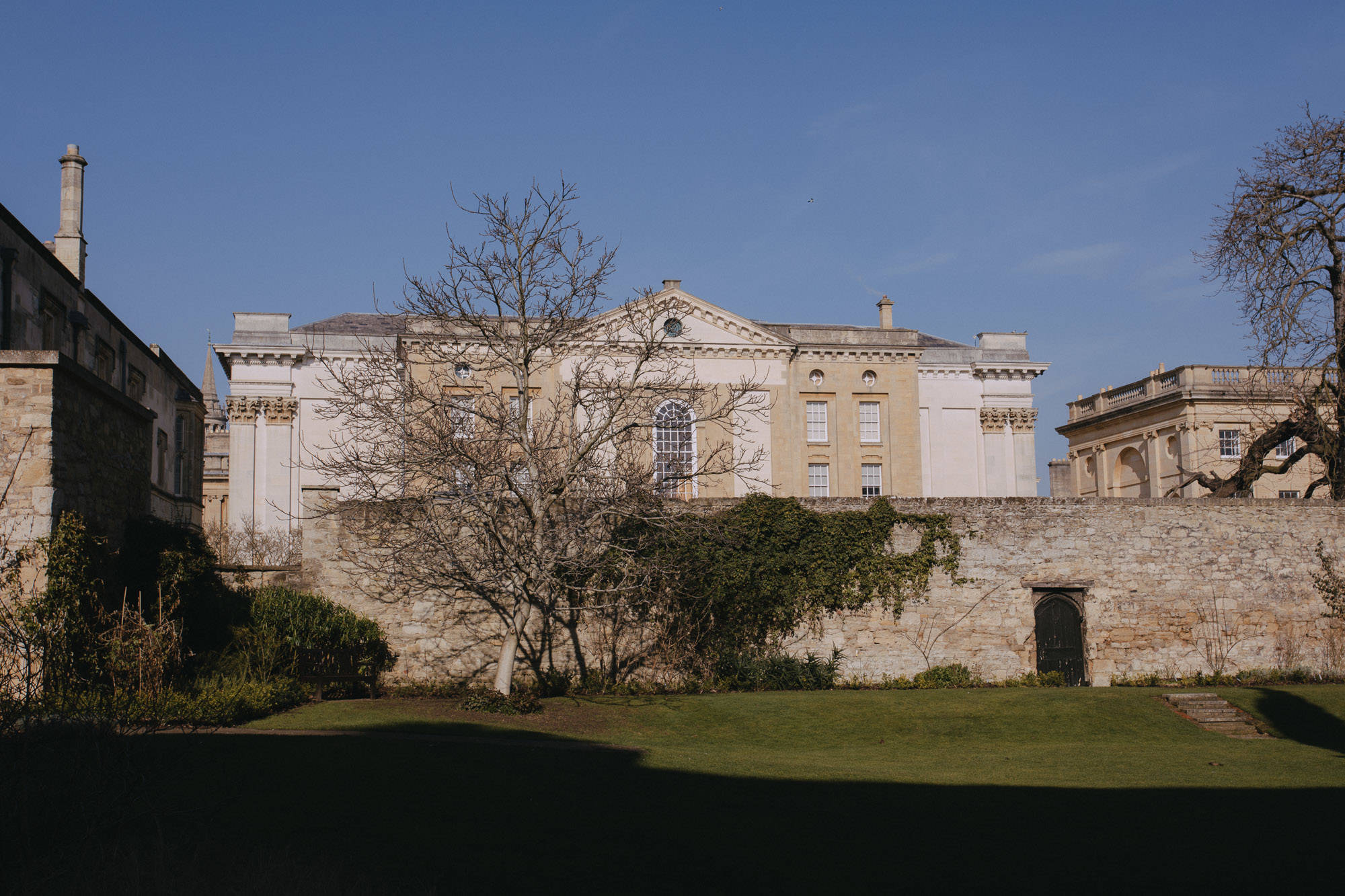 The Alice in Wonderland books started as tales told to Alice Liddell, one of the daughters of the dean and many locations in the books are based on parts of the college. Like the little door in the garden where Alice entered Wonderland. If you go to the Christ Church Cathedral they’ll be able to show you the garden. Also, the big tree on the far right is where their mischievous cat would climb up and pretend to be stuck…but when people would get a ladder to rescue it, it would climb down all by itself with a giant grin. Sound familiar? 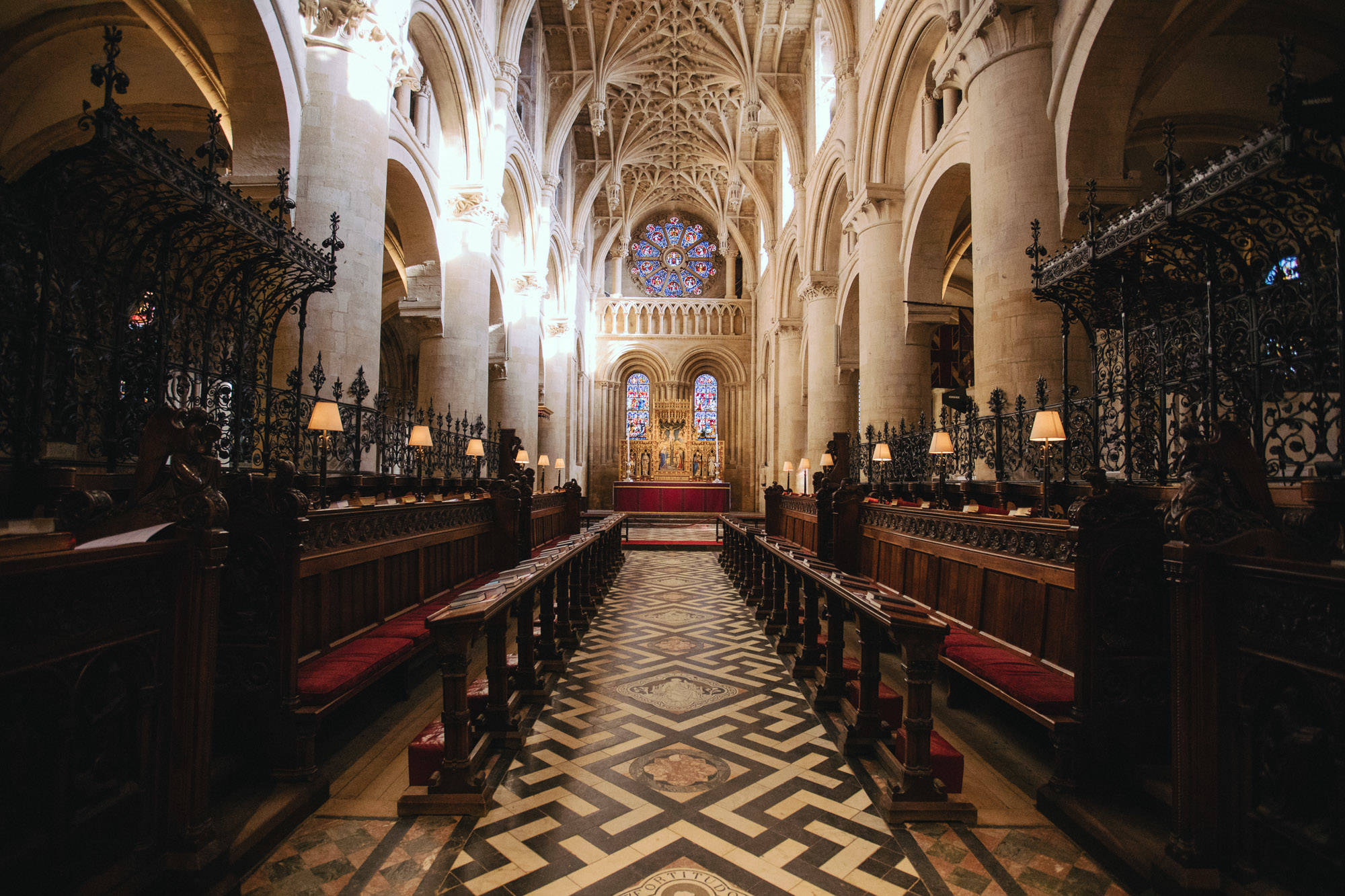 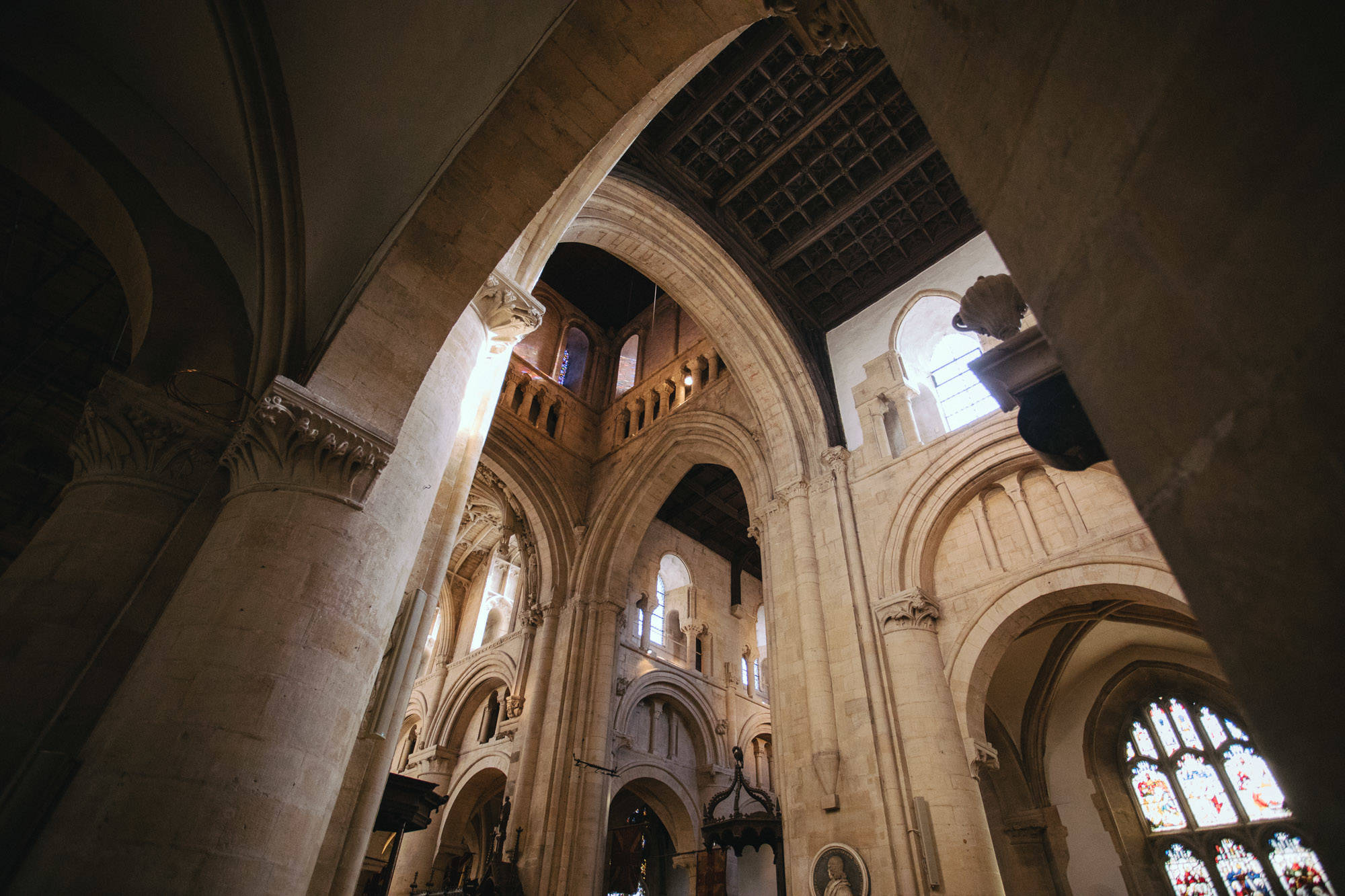 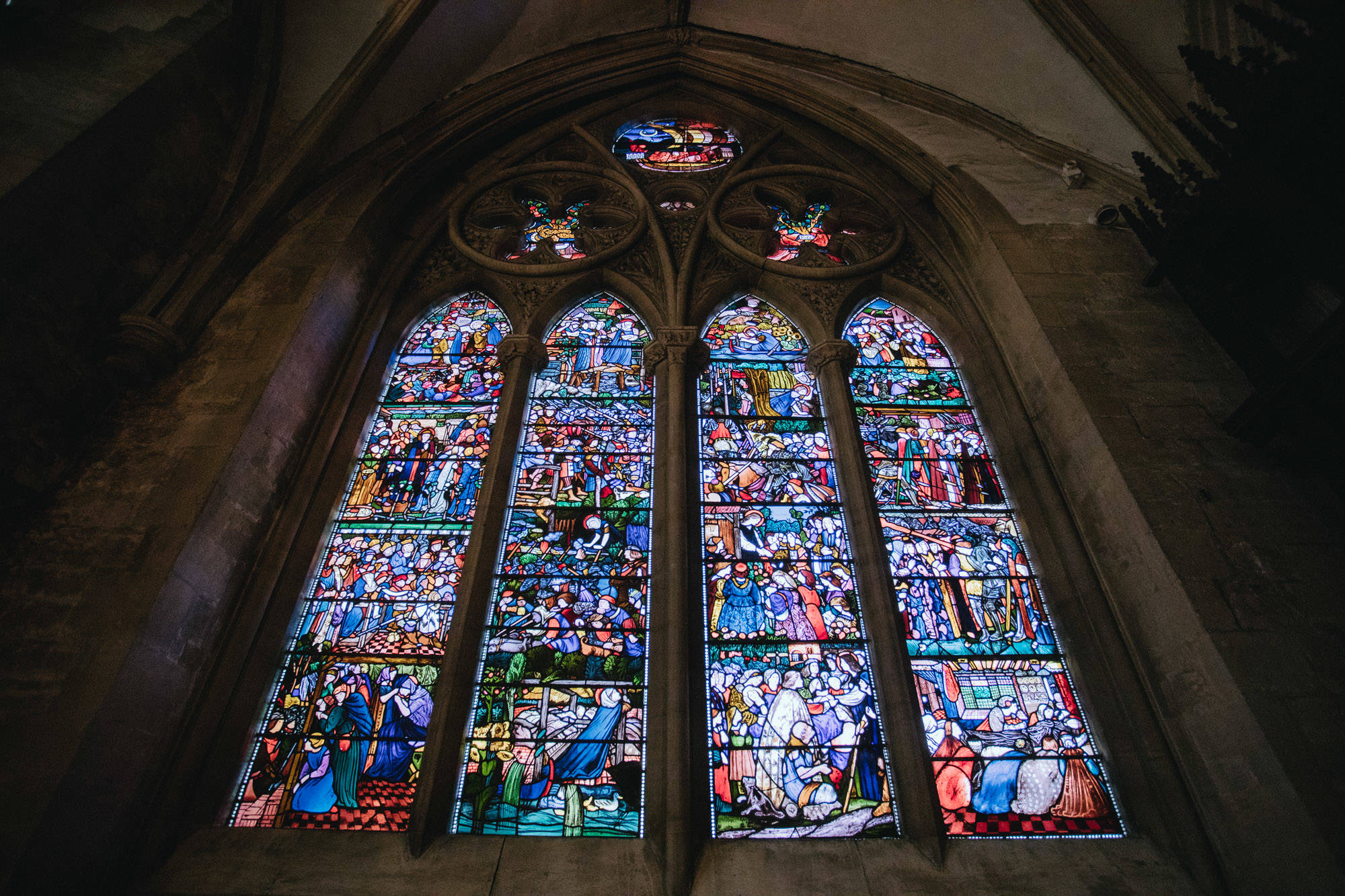 Speaking of the cathedral, its stained glass windows are a piece of art, with intricate details and such vivid colours you’d expect more in a graphic novel than in a church. This one featured here tells the impressive story of St. Frideswide, Oxford’s patron saint and for some reason it includes a modern looking toilet in the last panel. Toilet humor never gets old, right? 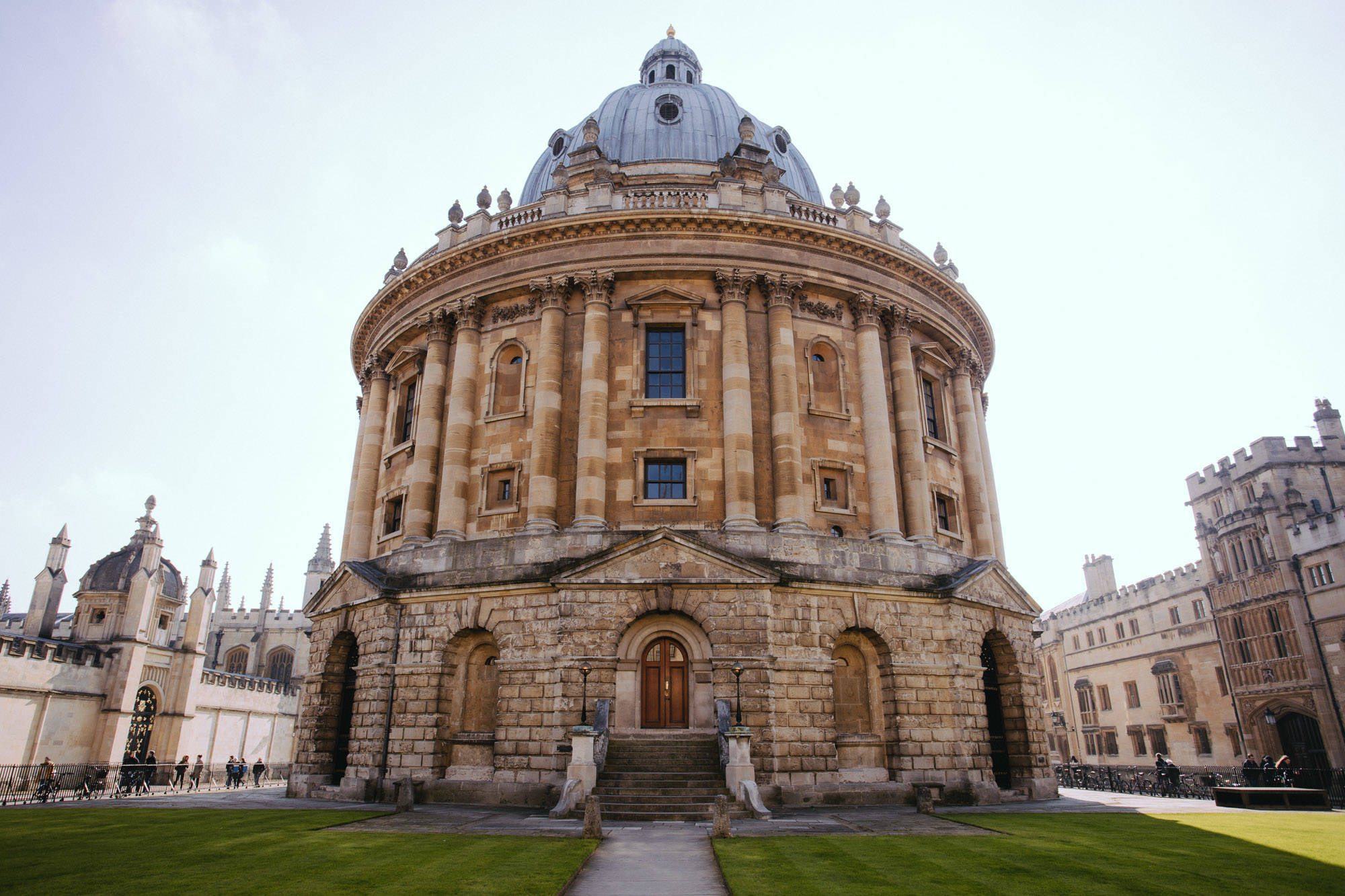 The Radcliffe Camera – which by the way has nothing to do with Daniel Radcliffe – has to be one of the coolest libraries and a lovely piece of architecture to boot. Something Tolkien noticed too and he based Sauron’s temple to Morgoth on this very building. If you have more time, you can go on the hunt for Oxford’s many other precious Tolkien sites, such as Merton College, the Bodleian Library, Addison’s Walk, the Botanical Gardens, The Eagle and Child pub and Tolkien’s home.

Which locations from your favourite books have you seen or really want to see in real life?