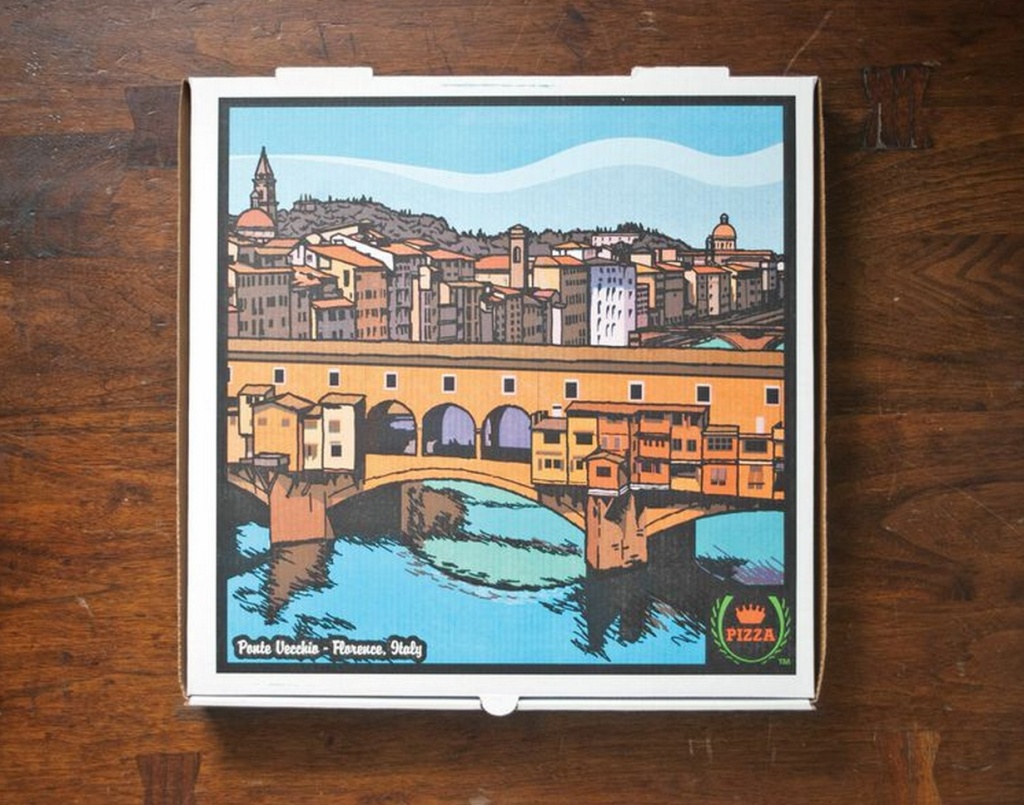 Yesterday you could read about a cereal cafe opening in Shoreditch and today I have another ‘only in Shoreditch’ happening that I have to share … an absolute must do if you are in London this weekend.

The World’s Largest Pizza Box Collection Arrives in the UK

UK online food ordering brand hungryhouse has teamed up with Scott Wiener, author of Viva La Pizza: The Art of The Pizza Box and keeper of the world’s largest pizza box collection, to host an exhibition showcasing 100 weird and wonderful pizza boxes from around the world.

The New York based collector will bring a selection of his 750+ strong trove of global boxes to the Old Truman Brewery in East London from 5th – 9th November in an attempt to prove that a cardboard pizza box can be a fascinating work of art.

The exhibition will be divided by subject matter and includes pizza box portraiture, scenery, hi-tech interactive designs and even some ‘classics’ – from all over the globe.

Wiener began collecting boxes back in 2008, after saving a particularly artistic box in Italy, and the collection has since grown to Guinness World Record proportions, with the accolade being awarded in 2013.

Scott Wiener comments of his collection: “The first box I remember saving is a Roma Foods “Scenes from Italy” box. It was a ‘Volume 2’ and I was so excited by the idea of a series of boxes – it made pizza boxes seem like something that was varied and limited enough to be collected One of my favourites is the Simpsons box I found in Amsterdam. The image on the box definitely references the Simpsons but the Bart and Homer characters are not quite right – it’s a funny attempt to avoid trademark infringement, which I just adore.”

hungryhouse has worked closely with Wiener to curate the 100 box exhibition and bring it to a UK audience for the first time.

Alice Mrongovius, Marketing Director, hungryhouse.co.uk adds: “As soon as we saw Scott’s spectacular collection we began planning to bring him and his favourite boxes over to the UK. This is an exhibition that will unite both pizza lovers and art aficionados in mutual appreciation!”

You can take a look at this collection from today until Sunday the 9th. The Art of the Pizza Box is open from 09:30 till 18:30 at 7, Dray Walk, The Old Truman Brewery – that is just across Rough Trade. And the best bit: free admission.

Who is going or would go?