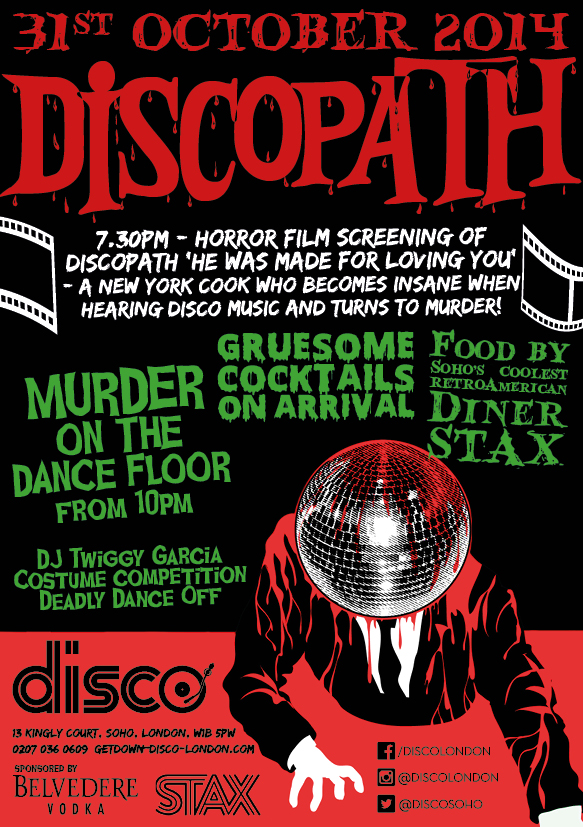 This year, in honour of the world’s favourite hallowed holiday, and the decade in which not only DISCO was born, but also in which some of the best and most iconic horror films were ever created, on Friday 31st October, DISCO will be screening a spine-chilling and famously frightening, 70s style cult classic, DISCOPATH!

The night will begin with guests checking in, before taking their seats for the fabulously retro and truly terrifying interactive film screening. During which, they will be served a selection of blood-chilling beverages, by Duane Lewiss hunters and victims…

Food from a specially designed Retro Discopathe menu, will also be served before, and during the film, courtesy of Stax Diner, along with an abundance of alcoholic ‘Hard Milkshakes’. A special ‘blow your head off’ Belvedere Vodka cocktail will even be created for the night called Death by DISCO, that will contain more chocolate than the most successful trick or treat trip.

Once the film has come to an end, all those who haven’t run home to hide under the covers, or been killed off by the Discopath, will be welcomed to stay for a Freaky Friday night in Funky Town, as we commit Murder On The Dancefloor into the early hours. There will be roller skating table service, a deadly dance-off competition, prizes for best costumes and some sinister surprises and ghoulish giveaways to be revealed on the evening…

So hit the haunted cinema and then raise hell like a Discopath on the dance floor till dawn!

ZSL London Zoo will be hosting a fun week of spooky goings on this Halloween half term (25 October – 2 November) with a little help from some of its furry, feathery and scaly friends. Boo at the Zoo will offer visitors a packed week of ghoulish animal treats that will see them howling with delight as they get up close and personal with mighty owls, enter the Black Widow’s Lair and face a mystery feely-box challenge.

Putting on an extra brave face, visitors will travel through hair-raising activity stops, meeting rats, bats, spiders and owls, using their Boo at the Zoo activity passport to gain stamps. On their journeys visitors can stop by the Zoo’s Victorian Grim Curiosity Shoppe, full of creepy and eccentric objects from the Zoological Society of London’s historical collections, and join in with fun spells with a surprise reptilian guest.

Halloween at the Grant (Museum of Zoology) // Friday 31st October

Where better to spend Halloween than in a room of scary skeletons and skulls? If it’s “Eye of newt, and toe of frog” or “Wool of bat, and tongue of dog”, we’ve got all you could want for cooking up some toil and trouble this All Hallow’s Eve. Join Halloween at the Grant, if you dare, for a special late opening and discover the Museum after-dark, enjoy a drink and uncover some ghoulish animal facts along the way with Halloween themed specimen labels. Aaand … there is no need to book, tickets are sold on the door and cost £5 and come with a free glass of wine. Prizes will be awarded for the best dressed visitors.

3 thoughts on “Halloween Events In London”