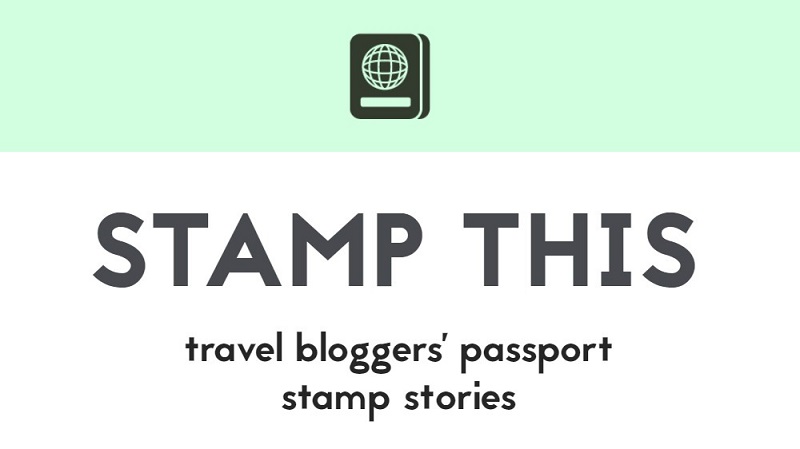 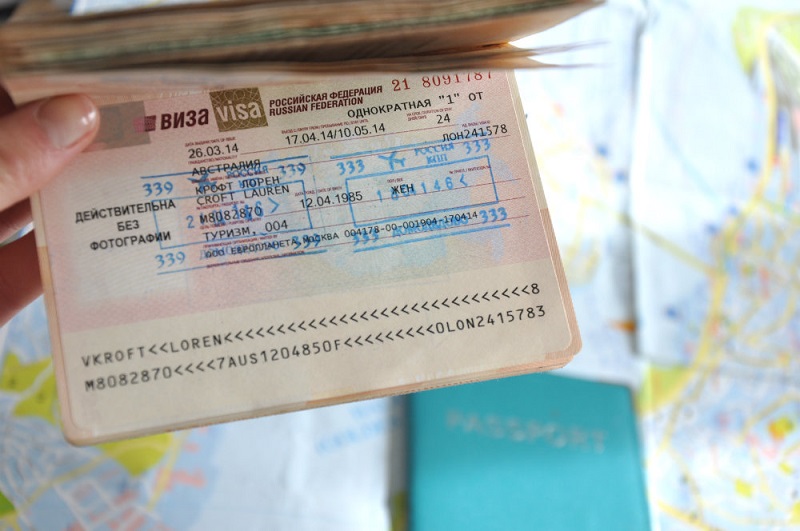 A Bird In The Hand | Elle
It’s so difficult to choose just one passport stamp, because there’s a story and memory behind each one, but I suppose my Russian visa stands out for a few reasons. Firstly, it was more difficult to obtain than most visas I’ve had to apply for – being Australian I’m very lucky to be able to arrive in most countries without any preparation, but for Russia I had to send my passport away and fill in a bunch of forms. But more importantly, this was a trip my Dad and I had spoken for years about doing together, and we had such a great time in Moscow and St. Petersburg that this visa just makes me smile whenever I look at it.

Amsterdam Blog | Ashley
This stamp is a symbol of love, happiness and adventure to me. Without trying to sound corny, Cambodia healed my soul. Before I went backpacking, I had been struggling with depression and Cambodia was just the kick that I needed. The people were so happy there, despite the history, and it just rubbed off on me. I felt like a free spirit again, and most importantly I started to feel like me again.

It is also the stamp that bought me to Amsterdam. In a weird twist of fate I met someone Dutch in Cambodia who I eventually moved to Amsterdam to be with. It didn’t work out between us, but I had fallen in love with the city by then and so I decided to stay. 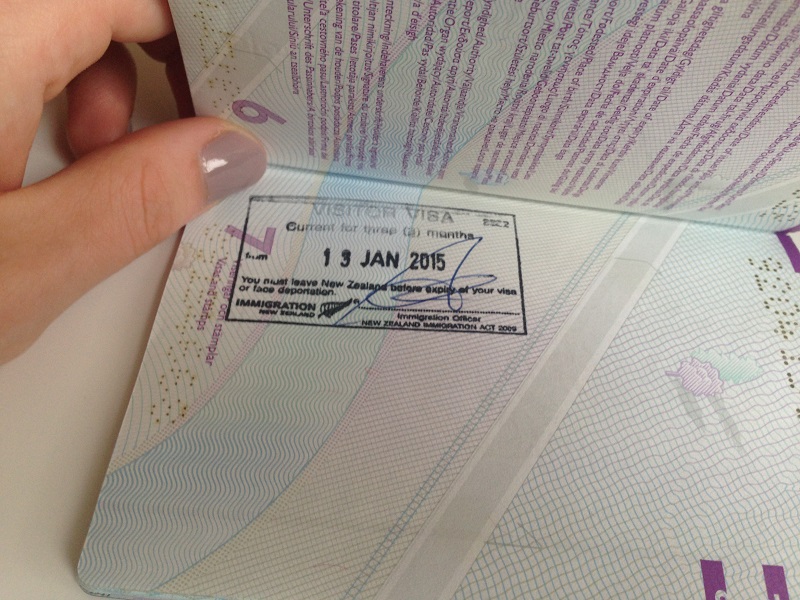 Earth Wanderess | Evelina
I got my current passport only two months ago, but it just so happens that my favorite stamp is in this particular one.

I received my passport just a few days before I was taking off on a solo journey 18.000 km from home. I was finally making my dream come true by exploring New Zealand.

But this stamp does not only symbolize an amazing trip in a land of incredible nature. It also symbolizes a huge turn in my life.
When I left for NZ, I had just gotten out of a long and dysfunctional relationship. I felt free but I was lost. My emotions were ever-changing, just like the landscapes of New Zealand. Somewhere along the winding roads, I found an inner peace and a sense of security with being my own for the first time in a long while.
I came to New Zealand feeling lost, but left feeling stronger and happier than ever. This stamp will be a constant reminder for me to do what makes me happy and to live the life that I want. 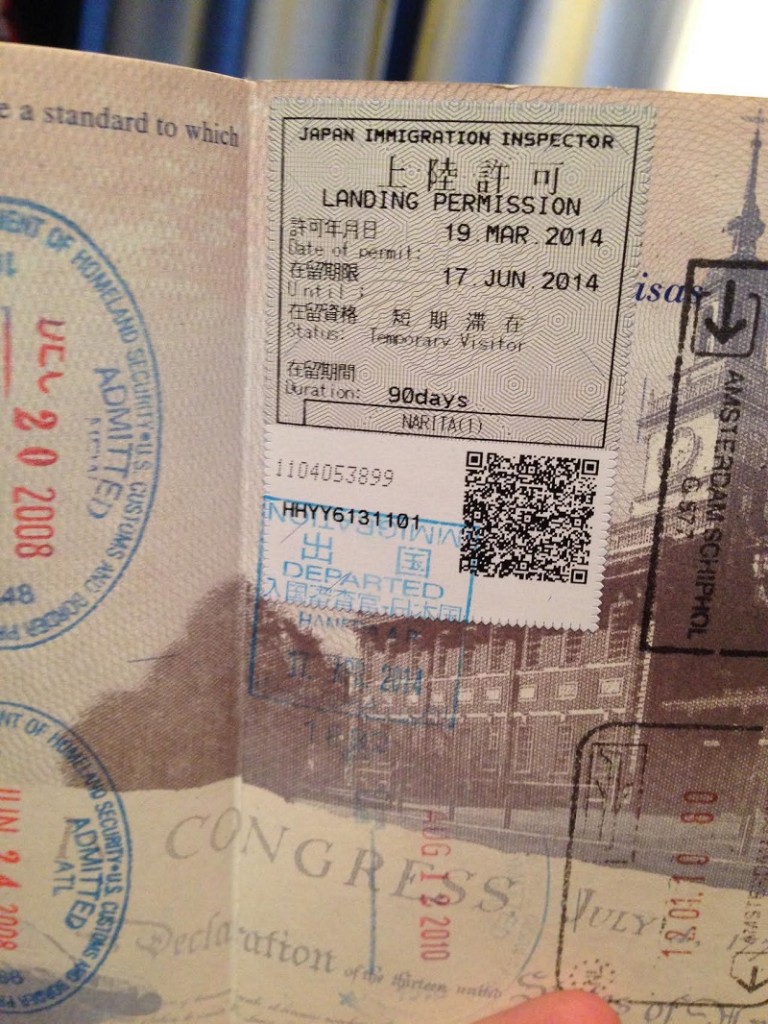 Happy Travelers | Liz
Exactly one year ago, I got a “Japan” stamp in my passport. My parents and sister moved to Tokyo last year and I was fortunate enough to make a trip out there. It was my first (and still only) Asian country. Talk about perfect timing to visit Japan! End of March and beginning of April is cherry blossom season. I can’t even describe the beauty and happiness in the atmosphere walking among thousands of people taking in the beauty with some cherry blossom wine! Fascinating culture, some of the best food I’ve ever tasted, and the landscape was beautiful! 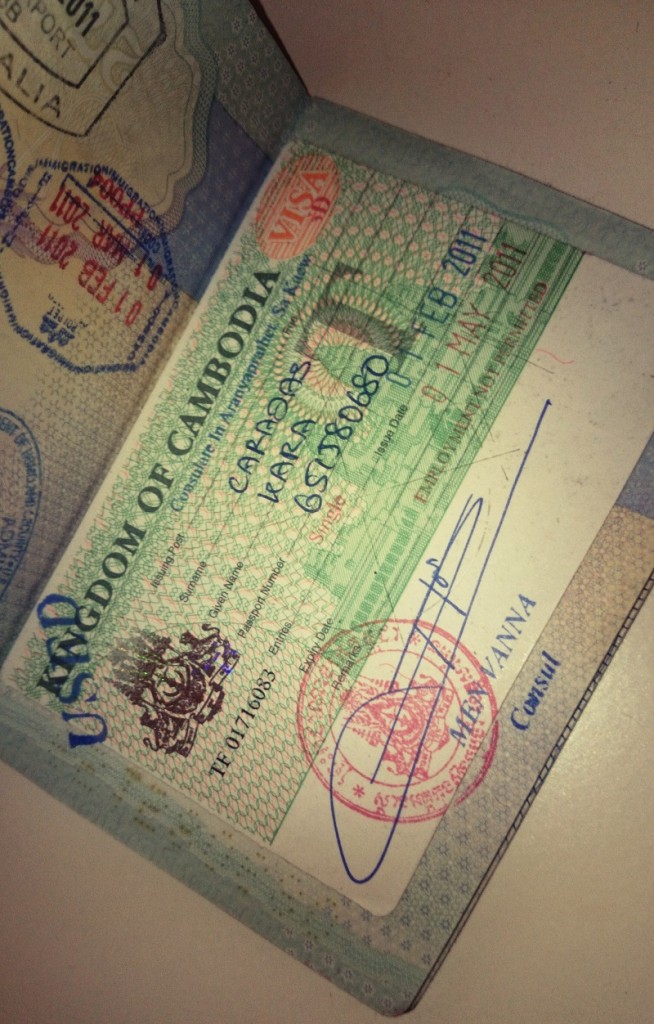 Heels In My Backpack | Kara
My stamp for Cambodia marks a change in my attitude as a traveller. I was always a planner. Itineraries were worked out months in advance and my RTW flights had all been pre-booked. This all changed when a new friend I’d made in Koh Tao threw out the idea of jumping on a bus that day to embark on the 30 hour journey to Siem Reap. Just because we could!

Everything changed for me at this point. I became a spontaneous traveller and ever since then I have jumped at the chance of a last minute, throw-caution-to-the-wind adventure! This is also what turned my 3 weeks in Thailand into 4 months of exploring the wonders of Southeast Asia. Easily done, right?

This stamp also reminds me of what a newbie backpacker I was at that point. Unbeknown to two bright-eyed girls with 2 weeks travelling under their belts, we had got ourselves onto the infamous scam bus. Yep. That exciting decision in Koh Tao was followed by a visa scam, a car bomb going off at the border, visits to shops where you are coerced into buying things and lastly a death threat from a tuk tuk driver in Siem Reap. Well I wanted adventure didn’t I? 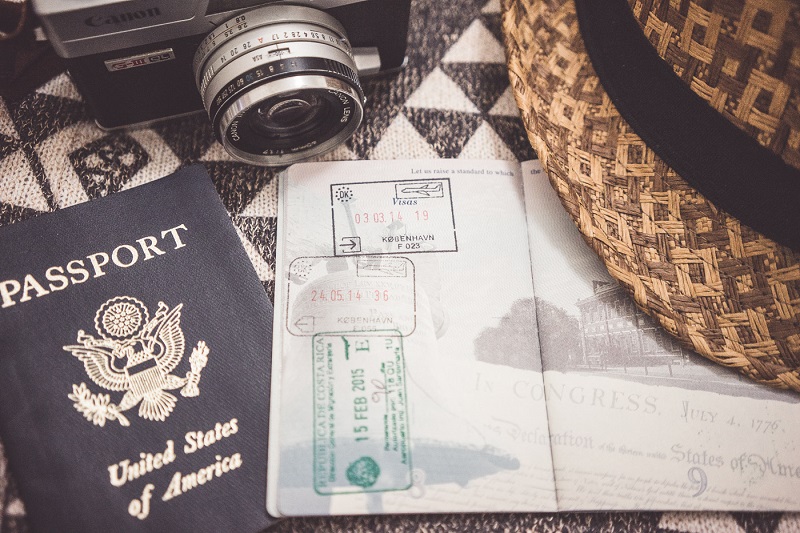 North To South | Diana & Ian
There’s no question about which passport stamp is our favorite. In my passport, it’s on the top left of the very first page — the slightly cock-eyed inaugural ink in my freshly renewed book.

That stamp is special not because it led us to an awesome experience in a new country, but rather since it represents the most significant moment in our lives so far, when we stopped following society’s rules and began living a life of full-time travel. We’d left our comfort zone and quit our jobs to dive headfirst into the uncertain world of entrepreneurship. With that stamp, our lives as digital nomads had officially begun.

Now, one year later, we’re making money from blogging — how cool is that? — by sharing our travel and photography experiences with the world. And we’re still traveling with no plans to stop! Taking the leap was scary, but it didn’t take long to prove to ourselves how practical, affordable, and downright awesome a life of travel can be.

Shut Up And Go | Damon & Jo
The day we received a passport stamp from the country of Panama was the day we knew we were true travelers. We had just heard the ever-so-kind words of the airport check-in counter staff, “You can’t go to Costa Rica; you don’t have a yellow fever vaccine.” Apparently, going from the United States to Costa Rica is fine, and we had done it before, but going from Ecuador to Costa Rica requires the yellow fever vaccine because of Ecuador’s intense jungle life. Go figure. They explained to us that the only way to get to Costa Rica was to either head back into Quito and consult with a doctor during business hours (which meant waiting three days until Monday), or “quarantine” in Panama for six days. So within two hours of this bittersweet news, we found ourselves flight to Panama with nothing booked and nothing planned.

The best part is that when we left Panama after six days, we had gotten eaten up so badly by mosquitos (17 bites on one arm), that it now looked like we had Yellow Fever. 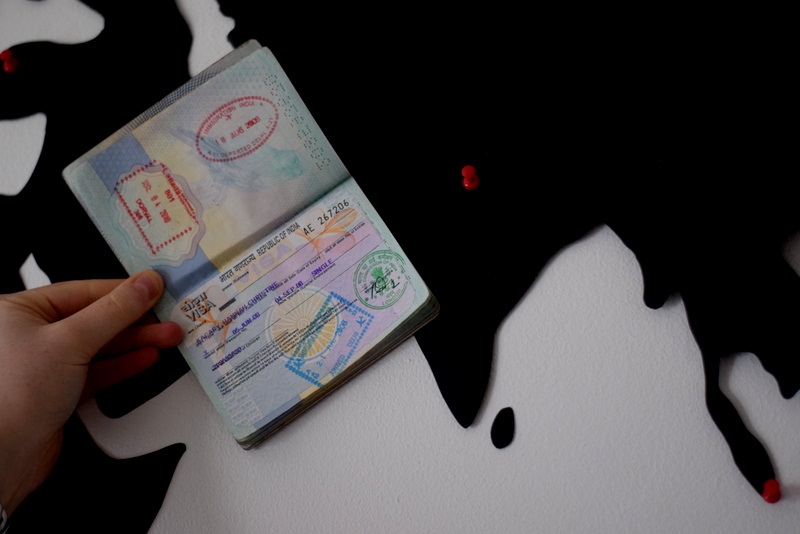 That Adventurer | Hannah
I’m one of those people that loves flicking through their passport and pointing out all the fantastic trips I’ve been lucky enough to go one. At least I hope there’s more people like me.

Most of the stamps come from my travels last year in South America. There’s multiple stamps from Argentina and Brazil when we visited Iguassu Falls and crossed the border multiple times in the course of a couple of days. There’s also a stamp from Paraguay which we visited just to get the stamp. Given that Iguassu borders Paraguay, Brazil & Argentina it seemed silly not to just pop over the bridge. I also bought some trainers to replace my worn out shoes – so all in all a pretty good trip to Paraguay was had!

My favourite passport stamp though? Well really it’s a sticker. It’s my Indian visa from when I spent a month over there with two weeks trekking in the Himalayas. It really was quite the adventure. It involved repainting a school in a village high up in the mountains, trekking to 5500m above sea level, crossing raging rivers and walking in wet boots which resulted in peeling the skin clean off the soles of my feet! The best part? Definitely walking through the entrance and seeing the Taj Mahal. It was a lovely sunny day and the white building just gleamed. It was the perfect way to finish the trip and I love remembering that month every time I see the colourful visa page. I’d love to go back! 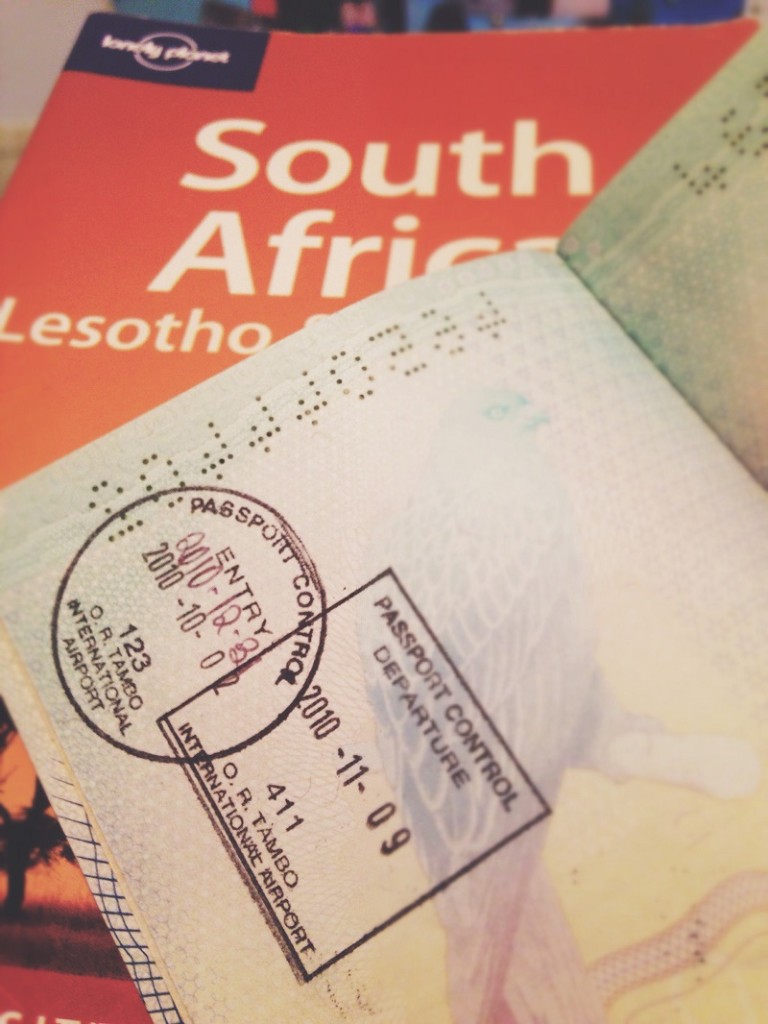 The Little Backpacker | Jodie
My favourite passport stamp is the first one I received in this passport (I have gone on to get a lot more since). This trip to South Africa signified a new chapter in my life and it is the place which gave me the travel bug. I had never travelled alone, I had only taken one long haul flight before and I was petrified as I walked through the immigration queue in Johannesburg airport. This was a trip of nerves and excitement but one that went on to change everything about my life. If it wasn’t for this trip and this stamp I’m not sure I would have received all of those other stamps.